After assaulting a disabled veteran who attempted to stop them from abusing a turtle in Daytona Beach, Florida, 3 young men have been arrested. 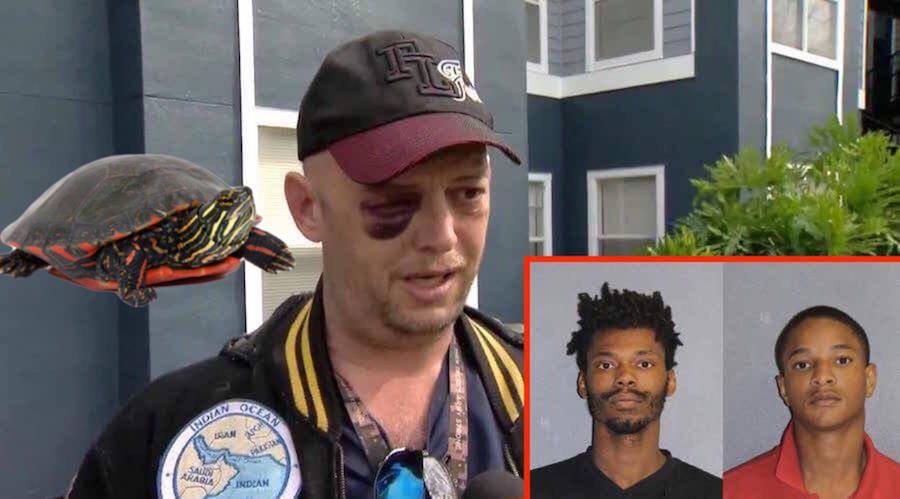 “He had the turtle like this,” Navy veteran Gary Blough told WOFL, holding his hands above his head. “Slamming it down. Somebody has cleaned up the sidewalk now. It was covered in blood.”

This veteran’s wife was getting out to get the mail with their young child when they saw the turtle being attacked by the three punks. She went back crying to Gary and told him what was happening.

“They said there was three guys out here killing a turtle,” he said.

Naturally, Gary went out to see the 3 boys: 18 year-old Johnnie Beveritt, 23 year-old Ryan Ponder and a 16 year-old boy who has yet to be named. All of them violently abusing the poor animal to death.

It really upset Blough to see and he couldn’t stand-by and let it happen.

Blough tried to help the turtle, which was already grievously wounded, back to the water and when he wasn’t looking he was jumped.

“While I had my head turned, two of them started hitting me in the back of the head and punching me. Next thing I know we’re in a scuffle and I’m fighting three of them at the same time defending myself,” he said.

The fight left him badly hurt, including, according to The U.K. Daily Mail, “a broken skull and facial bones, internal bleeding and a concussion.”

Since the incident, the 3 have been arrested and all charged with animal cruelty along with aggravated battery. As for the turtle, it was found in a pool of its own blood, dead later.

This is an outrage, for more than just one reason… the biggest being the thought that these boys had that level of hatred and lack of humanity in them at such a young age to have the sick thought to even do this with no remorse to another living creature.

They weren’t out hunting, it wasn’t just 1 kid that had deep rooted issues. This was a group of boys that all possessed the capacity to disregard their humanity and violently hurt a living thing, then turn on another human being who did nothing to them, but was just trying to help the turtle. They beat him too.