You never expect to encounter a crazed maniac when you’re going about your daily business, but then, it’s always a possibility. One woman found that out the hard way after she was attacked by a machete-wielding homeless man who slashed her arm. 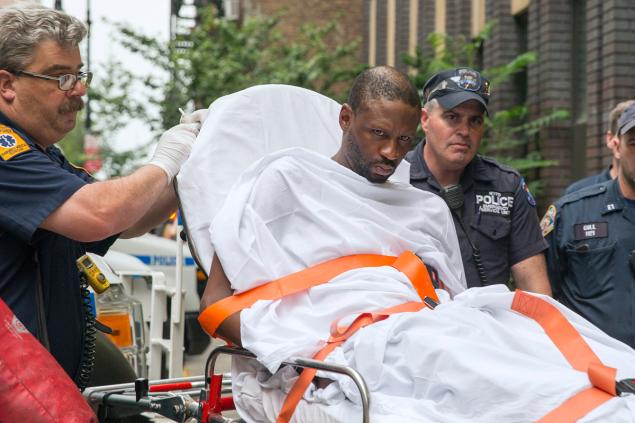 A machete-wielding homeless man has slashed a stranger in a New York City park after she left a nearby yoga class.

Frederick Young, 43, was allegedly carrying the large blade through Bryant Park in Manhattan around 11.30am when he approached the woman and sliced her arm.

The 31-year-old woman, who has not been named, suffered a substantial gash to her right arm, Chief of Detectives Robert Boyce told the New York Post.

She was rushed to Bellevue Hospital for treatment and is in a stable condition.

She was conscious and alert when she was taken to hospital.

Police believe that the attack was unprovoked and that the woman, who is Korean, was sitting down at the time, the New York Daily News reported.

‘He goes into the park and he takes a machete and hits a young lady, who had just come from a yoga class,’ Boyce told ABC7.

‘I don’t know if shes a tourist or a citizen of New York City.’

Security officers at the park flagged down police, who arrested the man.

A video taken by a witness, Michael Munevar, showed officers taking the man into custody on the steps of the park, while someone held on to the weapon nearby.

Other bystanders used a belt to make a tourniquet for the woman’s arm.

Police said that Young has 23 prior arrests, including for menacing someone with a machete in 2010. He is believed to be homeless.

Most recently, he pleaded guilty to stealing $45 worth of items from a midtown Kmart, including a shirt, a hat, toothpaste, a toothbrush holder, soap, deodorant and a backpack.

This just goes to show, once again, the importance of guns and being able to defend yourself. While this woman was lucky enough to not be more seriously injured, and the man was comprehended quickly, we can’t always rely on police to be there to save us, and violent criminals will be violent regardless of which tool they use.