High-Capacity Magazine Manufacturer, Magpul[1] has already declared that they’re moving out of Colorado because the state’s harsh new gun control laws. However, the repercussions for the state haven’t ended with the loss of hundreds of jobs and millions in tax revenue.

Now, 37 of Colorado’s 62 sheriffs are suing in an attempt to overturn the background checks for private gun sales and the legal limit of 15 rounds for magazines. A number of the sheriffs have gone on record harshly criticizing the law as well. 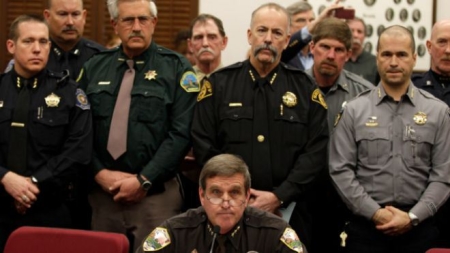 Sherrif Mike Ensminger noted that, “We can’t figure out how these laws would be enforced at this point in time without violating someone’s constitutional rights.”

Larimer County Sheriff Justin Smith added, “We are here to provide a voice to the millions of honest, law-abiding Coloradoans who were ignored by their governor as well as by the majority (Democratic) party at the State House.”

Weld County Sheriff John Cooke took it even further by saying he wouldn’t enforce the new gun control laws because, “They’re feel-good, knee-jerk reactions that are unenforceable.” El Paso County Sheriff Terry Maketa agreed, “I can’t tell you when those were sold, bought and purchased. As far as I’m concerned, they were all pre-July 1 if the governor does sign this bill.”

When the majority of people in your state who are responsible for enforcing a law are willing to go to court to stop it from being implemented, wise politicians should pay attention.