A man who was previously arrested 17 times, and still not behind bars, committed more crimes and this time took the life of an NYPD officer. Officers Paul Tuozzolo and Emmanuel Kwo responded to a call about a home invasion. They approached a vehicle with the suspect in it. The suspect opened fire out of nowhere! He shot one officer in the leg and he will survive. The other officer was not so lucky. 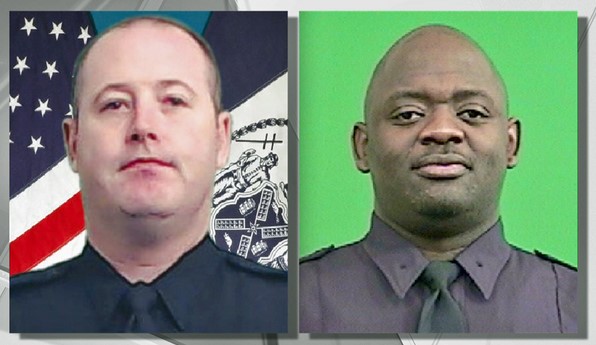 NBC New York[1] – The slain sergeant, 41-year-old Paul Tuozzolo, was a 19-year veteran of the NYPD and a father of two young children, de Blasio said.

Tuozzolo and the other shot sergeant, 30-year-old Emmanuel Kwo, had been responding to a report of a home invasion at an apartment on Beach Avenue in the Van Nest neighborhood Friday afternoon.

That’s where an armed man, identified as 35-year-old Manuel Rosales, broke into a home, violating an order of protection filed by his estranged 29-year-old wife, NYPD Commissioner Jimmy O’Neill said at the briefing. Also inside the home was the 3-year-old son of Rosales and his estranged wife, along with another 13-year-old child and a 50-year-old woman.

After holding the family hostage for hours, Rosales left the home, and the 50-year-old woman in the house called police and gave police a description of his vehicle, according to officials.

I’m shocked that someone who was arrested 17 prior times is somehow walking the streets of New York. Even if all 17 arrests are for very simply, silly things, like possession of marijuana or jay walking, you’d think that after 17 arrests, that someone needs to learn a lesson or go into a rehabilitation program.

He won’t learn it either, because the cops shot him[2] and he perished.

One less criminal off the streets, but you have to question why someone who was arrested that many times is allowed to be out in public.

There needs to be some rules put in place that send the repeat offenders to jail for a while.

Let them meet Bubba for a few months, then put them in a rehabilitation program to teach them some job skills and see if that helps prevent them from committing further crimes.