How drunk do you have to be not just to hit a man, but to keep driving with him stuck in your windshield?[1] 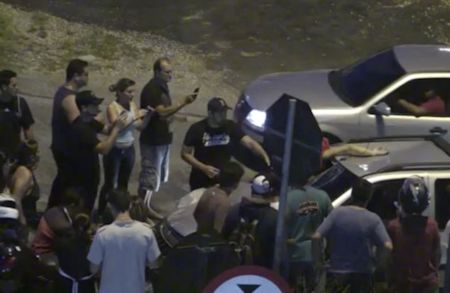 A Brazilian drink driver drove five miles with a dying cyclist he had knocked over trapped inside his broken windscreen.

…Jose Adil Simioni, 58, was led staggering from his Fiat Strada in handcuffs as tragic Marco Aurelio Dlovski, on his way back from work when he was hit on a bend, was pronounced dead at the scene.

Paramedics covered the 31-year-old’s body with a white blanket before freeing his body from the smashed windscreen and taking it away on a stretcher.

The amazing scenes – in Pinhais near Curitiba, south-east Brazil, were captured on a highway camera.

One of the police officers called to the scene said: ‘The driver was quite clearly drunk and had trouble walking.

‘We had to bundle him into the back of our patrol car quickly to save him being attacked by onlookers.’

The driver is facing drink-drive and manslaughter charges.

Imagine waking up from a drunken stupor to realize you killed another human being like this or worse yet, picture dying stuck in someone’s windshield as he drives down the road like nothing’s wrong. What a nightmare Jose Adil Simion created for everyone when he got drunk and went behind the wheel of a car.