There are few crimes more inexcusable than animal abuse. And a video that’s gone viral has people all around the world outraged. In it, one man kills a kangaroo in Australia[1] while another man films the sick attack, laughing the entire time. 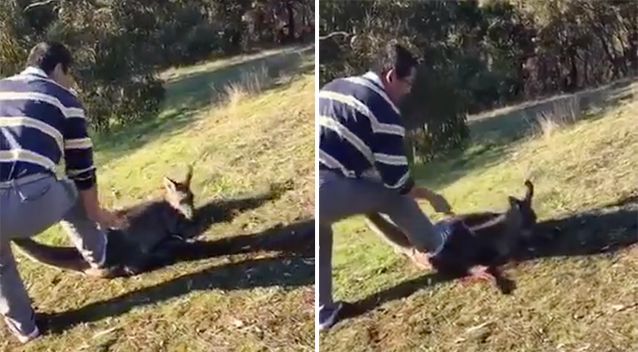 The video shows a Chinese man approach the injured kangaroo while his friend, who was filming, laughed. The kangaroo must have sensed danger was near, because it began to strike out at the approaching man. It also tried to escape by sliding down the hillside, leaving a trail of blood in the dirt behind it. But the man was able to avoid the blows and eventually caught it.

The man caught the kangaroo by the tail and then stepped on it to prevent it from escaping, and then began to stab him. He stabbed and slashed the kangaroo’s neck a total of 18 times, with the animal crying out in pain all the while, before the kangaroo eventually went limp and died.

Afterwards, the man crouched next to the lifeless animal as if he was a hunter boasting about his prey. It’s not known where exactly the killing took place or when it happened, but the NSW RSPCA has promised to investigate.

People have understandably been outraged about the attack on the defenseless animal. But some suggested it may have actually been an act of mercy. “Sadly the Kangaroo looks badly injured and if left, would have surely died slowly, from blood loss, starvation, dehydration or predation. The guy did a terrible job of humanely killing it, if that was the best option, who knows, from what little the video shows us,” one commenter wrote. Another commenter agreed, writing, “He was trying to do the right thing but very poorly executed.” Others, however, were more skeptical, with one person pointing out, “If he is trying to put it out of his misery, you don’t do it 18 times.”