“Man-Spreading” on subway leads to brutal attack with deadly weapon

Two people stepped on the NY subway to ride through the Lower East Side, when they encountered a man taking up two seats. The passenger hogging both seats was “man-spreading” when one of the new passengers asked him if he could have one of the seats. The man-spreader complied and gave up the extra seat, but then they had a debate over man-spreading.

The debate heated up faster than an episode of Judge Judy and that’s when it got NASTY. The new passengers were then attacked by the man-spreader and his friends. This turned into a 6 vs 2 fight and it gets worse. One of the men on the larger team whips out a HAMMER and begins attacking the two men with the hammer. You would think the guy was a carpenter by the way he nailed these two men.

All of this for being an inconsiderate person and taking up two seats[1]. Here’s four of the six suspects wanted in the brutal attack. 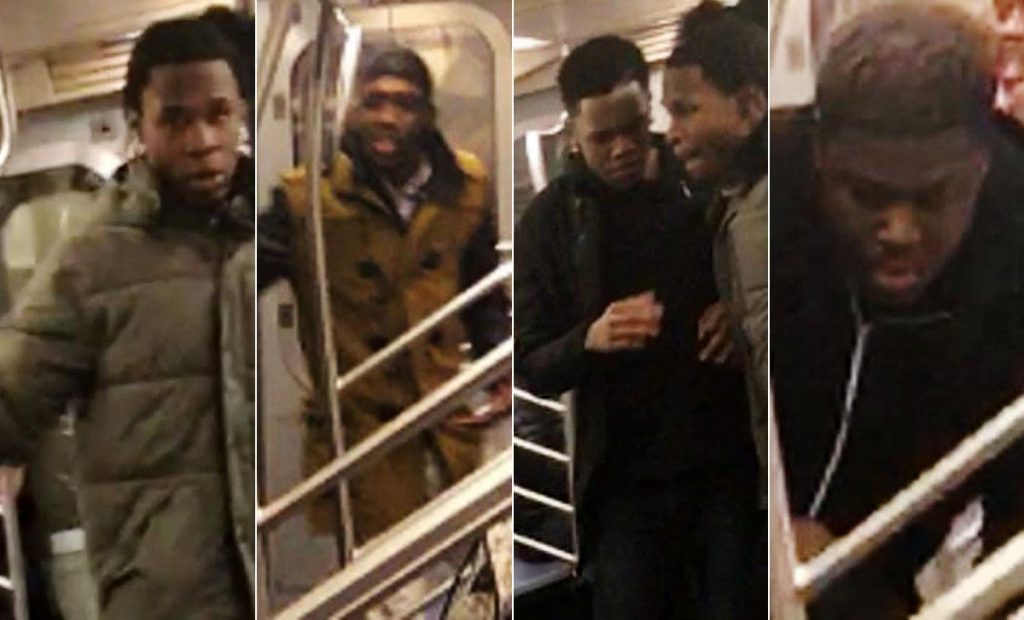 The 30-year-old hammer victim was on a Queens-bound J train pulling into the Bowery station when his 53-year-old pal asked a stranger taking up two seats to make room.

The seat hog complied but that didn’t stop the 30-year-old man from getting into an argument with him and six friends he was riding the train with, sparking a fight.

One of the six friends repeatedly kicked the 30-year-old man in the head and chest, officials said.

When the victim tried to defend himself, his attacker’s friends jumped in — and one of them pulled a hammer out of his backpack and bashed the victim repeatedly with it.

The suspects fled the scene and both victims were taken to a nearby hospital and treated for their injuries. The suspects are on the loose and will probably attack someone else by the time they get caught.

I’m very shocked that no one has this attack caught on their smart phone. I’m also shocked that video of the attack wasn’t released yet. That could be because it’s too graphic.

According to reports, the violence in the subways of NY is up 20%. People are lurking and committing crimes left and right up there. It’s best to carry a weapon for self defense in the event that someone starts a problem or attacks you. Citizens are allowed to fight back and defend themselves at the time of a criminal attack. No one should have to ride the subway and worry about being a victim.

For those wondering – man-spreading is the act of sitting with your legs as wide open as possible, often taking up two seats on a subway.