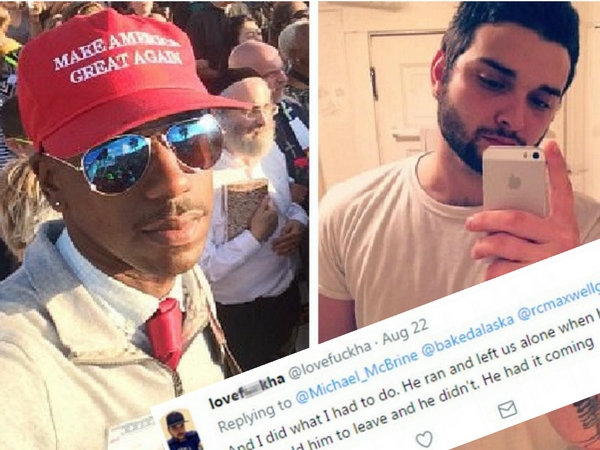 Trump supporter R.C. Maxwell was sucker punched by another man during two competing rallies this weekend. And now, his attacker has been identified, arrested and charged with battery and terroristic threats.

In an interview with Fox News, Maxwell said:

“If the optics were completely different and I was a black lives matter supporter and I was attacked on the Trump side of a protest I would be in the spotlight on CNN right now,” Maxwell said. “I went over to the left side to see if I could engage them with dialogue and I was instantly encircled by the so called anti fascists.”

“I think the fact that I’m a black conservative causes a lot of problems for the left side [2]because there’s no way they can really resolve that according to their narrative of what they think trump supporters are, so I think that was a bit triggering to the other side… I was getting lots of specific comments like you’re a sellout, you’re an Uncle Tom.”

After the assault happened, 20 year-old Richard Losey identified himself on Twitter as the attacker.

Footage of the attack was shared online afterwards and was handed to police. Losey, who identified himself and boasted about the punch on Twitter, was arrested trying to buy a bus ticket to get back to his native Ohio [3]on Tuesday.

The pair were among 2,500 others who descended on Main Beach for the demonstration on Sunday night.

Ohio? These two rallies were being held in Laguna Beach, California. There is often speculation that anti-Trump protesters are paid activists brought in from different parts of the country and this information doesn’t do much to stomp out that persistent rumor.