A Marine decided to take a page[1] from “To Catch a Predator” and set a trap for the beast who molested his daughter. This animal raped Marine vet Brandon Moore’s 14 year-old daughter while he was rushed to the hospital by his wife with what they thought was a brain aneurysm. What kind of demon does something like that? “This piece of crap found out I was in the emergency room, drove over to my house while my daughter was sleeping and molested her in her bed,” Brandon said. He was thankfully okay — the aneurysm turned out to be just muscle spasms — but their daughter definitely wasn’t. And Foster had abused the girl before. The Marine decided to take action after the police said it would take months to investigate. 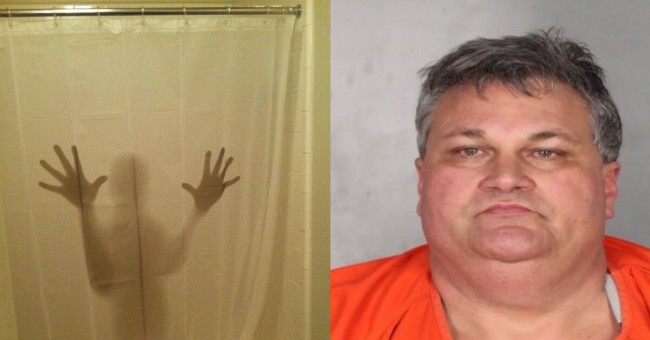 NBC’s “To Catch a Predator” has been off the air for some time now, but that didn’t stop this Marine from taking a huge page from its book, setting a trap involving a shower for the sicko who had molested his teenage daughter[3].

According to The Daily Beast[4], the sad saga began on June 24, 2014. Marine vet Brandon Moore was rushed to the hospital by his wife Leone with what they thought was a brain aneurysm. Leone sent a group text to several friends updating them on what was happening. That’s when Sean Foster asked if the family needed anyone to go over and check on their kids.

Leone responded no, but Foster went to the couple’s Lorena, Texas, home anyway. That’s when he raped their 14-year-old daughter Madalyn.

The Marine texted Foster pretending to be his daughter. Brandon said that “she” needed a ride to work and was currently in the shower. “She” then asked Foster to pick her up in 15 minutes. Foster then went through the unlocked back door. He then entered the bathroom, pulled back the curtain and said, “I thought you showered yesterday.” She wasn’t there, though. Instead, her dad busted in and his cellphone captured what happened next. Following is the graphic audio:

“It was between four and five minutes that I had to keep taking him down” until the police got there, Brandon said. “He shoved me off of him and went running to the front door, so I tackled him from behind and choked him and kneed him in the face until police got there. I beat him up pretty bad,” Brandon added. “By the time police arrived, my foot was swelling up from kicking him.” Foster was sentenced to 55 years behind bars for burglary, three counts of indecency with a child by contact and two counts of indecency with a child by exposure. Way to go, dad! He nailed the guy… he got off way too easy in my book.