Relic hunters[1] have dug in numerous places in the Petersburg National Civil War Battlefield Park. They were looking for historical relics to steal – it’s a federal crime. Meanwhile, veteran memorials in 3 states[2] were vandalized ahead of Memorial Day. Now, the memory of our heroes is being defiled along with the Constitution and all morality being wiped from America. It’s not just criminal, it’s tragic and evil. The park chief informed the media why leaving the relics undisturbed is so important. “Archaeological resources are a window to our nation’s history,” Rogers explained. “Historians are still writing history based on the archaeological clues left by those who have preceded us. Removing these artifacts erase any chance for us to learn from our nation’s greatest tragedy.” Rogers added that looters take from the battlefield using a metal detector, digging into the earth and taking whatever artifacts they find. This is just obscene that this is being done over Memorial Day weekend. 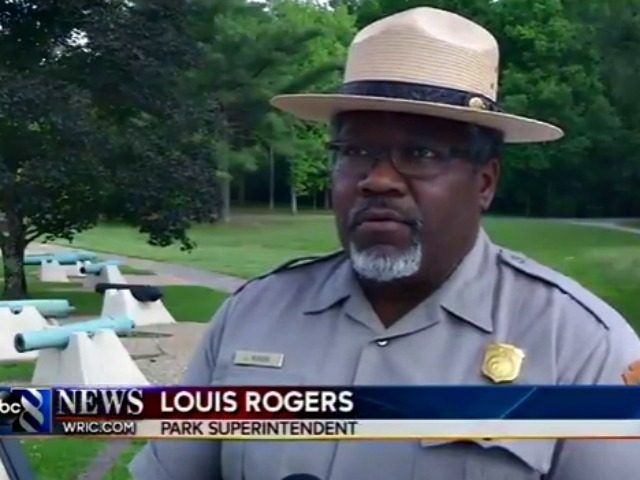 On the eve of Memorial Day, Civil War historians and battlefield preservationists were alarmed to discover someone had illegally dug numerous holes on the grounds of the Petersburg National Civil War Battlefield Park. The criminals were apparently hunting for relics buried long ago during some of America’s most trying days.

Relic hunting on federal battlefield property is a crime but that apparently didn’t deter whoever defaced this hallowed ground and neither, apparently, did the fact that the nation is only days away from pausing to remember the sacrifice of all America’s fallen soldiers, most especially those of the Civil War–the very soldiers the holiday was created to memorialize.

Petersburg National Battlefield Superintendent Lewis Rogers told ABC news[4], “This is an affront to the memory of people who fought and died on this field and it is destruction and theft of history from the American people.”

“This kind of aberrant behavior is always disgusting but it is particularly egregious as Memorial Day weekend arrives, a time when we honor the memories of our friends and family,” he added.

It is unknown if the relic hunters were able to get anything. But if they did and they try to sell it, one would hope they would be turned in. Civil war artifacts are highly prized collectibles and things from identified battlefields carry a premium price tag, especially when the battlefield in question is as important and famous as Petersburg. Petersburg was a seminal Civil War battle. It was the locale of the longest siege battle in US history as Lincoln’s general Ulysses Grant encircled and probed the weaker defenses of Confederate General Robert E. Lee in the Summer of 1864. Lee was desperate to prevent Grant’s forces from capturing Richmond, Virginia, the nascent Confederacy’s capital city. After nine months of grueling warfare, pitched battles, harassment via sharpshooters and a successful campaign of starving the Confederate forces of food and supplies, Grant’s men finally drove Lee out of Petersburg by March of 1865. It was only a month later that General Lee surrendered his forces to Grant’s victorious army starting the clock on the last days of the war. Originally named Decoration Day, Memorial Day is a day where we remember our fallen heroes… those that gave everything they had including their lives for our freedom. To defile it this way is monstrous.