Muslims are attacking people for being American. These are the sick people that are sneaking over in the refugee migrations. These are the same type of people who go on gang-raping sprees and cause violence in France and Germany. Everywhere the Muslim migrants refugees go, they’re causing barbaric chaos.

The incident in this article occurred in Denmark. A person watched masked Muslims attack and beat American teenage tourists, just because they were American.

And we want those creeps in our country? I don’t think so!

Why would they want to come to America if they don’t even like us? That doesn’t make sense. That’s like a black guy going to a KKK rally! Or if we want to use modern references (because the KKK isn’t really a thing anymore) – it’s like a white guy going to a violent Black Lives Matter rally[1] and getting beaten for no reason other than he was born without dark pigment. 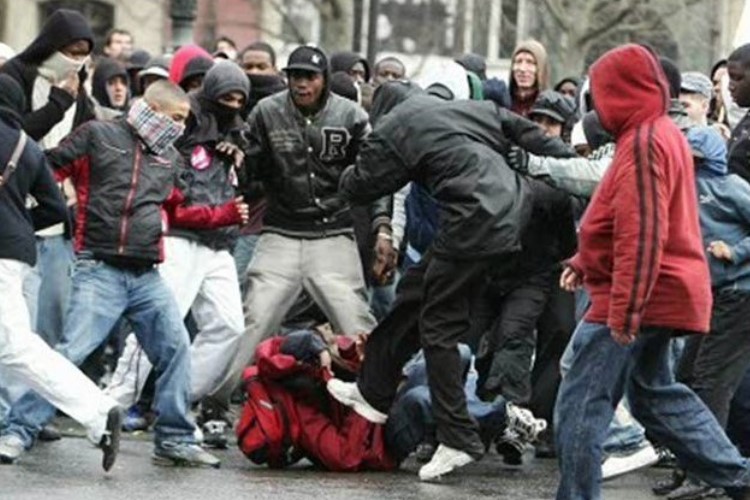 Here’s a translation of what happened[2]:

“On October 1st 2016 at 03am,  our 30-year-old son and his four friends (three US citizens and a Danish friend) was assaulted by 8-10 masked ethnic youths (Danish media slang for Muslims) a few meters from our son’s home.

The attackers ask if the friends are Americans, and when it is confirmed, they are knocked down, beaten and kicked, threatened with death and with a knife. It all takes place right under our windows, and we are awakened by one of the young people screaming in panic: ‘stop, stop, stop’.

From the window I witnessed our son’s friends being chased and I scream ‘stop, stop’ out the window. Our son stands on the corner and putting a hand to his eye, shouting to us that we should call the police. … We run down to the street and find the five victims hurt and in shock. Our son was kicked in the eye. The violent psychopaths are gone.

I’m calling the police at 2:52 and speak with a person for nine minutes. We are all in shock and can only see that our son’s eye is badly beaten. … The alarm central says that ‘the danger is over’, that I should take it easy, and that no police will come, as they are busy elsewhere in town … Saturday I call the police again and ask whether it is true, that the police will not be sent to a violent assault. The answer is ‘yes’, and that it is according to their guidelines.

This is messed up. I can’t imagine what will happen when thousands of terrorists sneak over in the refugee transports.

We have too many displaced and homeless veterans and children in America. We need to take care of our own before we reach out to people, especially people who don’t even like us or our culture.

We can thank pigs like the Kardashians for making Americans look bad.

No wonder Trump wants to make it great again. I hope his plan includes cancelling the Kardashians, shutting off The View and saying no to refugees.

***The picture above is not from the incident. There was no photo or corresponding video. The picture is relevant and what I imagine this attack could have looked like. Translation is from 10 News[3].