In Oakland, California[1], 40 to 60 primarily black teens stormed a BART transit train and robbed seven people before jumping from the train. This isn’t the first time either. This has happened at least twice before. There was surveillance tape of the platform, but allegedly some the security cameras on the train were just for show. What video there is has now been given to the police, the Housing Authority and the heads of the school system there. The passengers were assaulted and a few had minor facial wounds and were treated for them. These teens knew exactly where and when to hit this train, so they wouldn’t get caught.

There was extra security at the station because this has happened before and police were expecting a hit. But they outsmarted the cops. They also smashed the cell phones of those they robbed first thing so they could not record what was happening. The passengers were terrified. They grabbed purses, wallets and jewelry and fled. The thugs jumped the fare gate at the Coliseum Station Saturday night in this latest attack. The media was not called as BART did not want to publicize the attack, but it is getting out now. 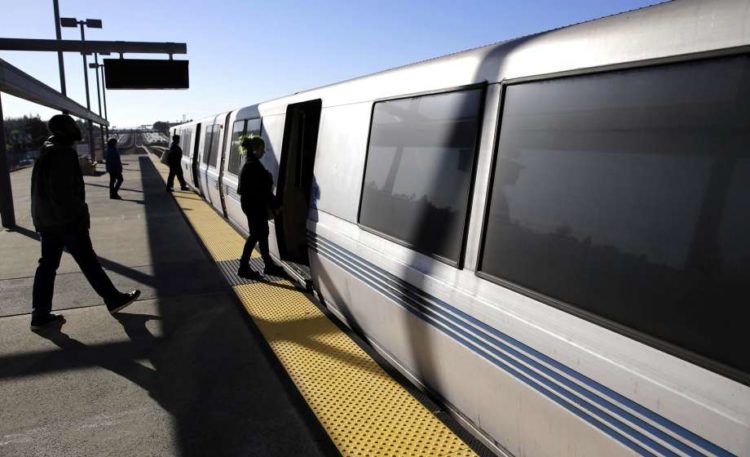 OAKLAND, Calif. (AP) — Dozens of teens robbed and assaulted passengers on a regional transit train in Oakland over the weekend in an apparently orchestrated attack, authorities said.

They entered a train that pulled into the station, grabbed bags and cellphones from seven passengers and then ran off into the neighborhood before transit police could respond.

Authorities were reviewing surveillance video to try to identify the suspects and planned to share it with city police, the Oakland school district and housing authority officials.

The transit system has experienced a series of robberies, prompting officials to step up patrols in recent weeks. They are tracking the locations of the crimes to increase the police presence at those stations, Trost said.

This is the biggest number of teens they’ve seen yet in these robberies. It’s a wonder no one has been killed yet. A number of the passengers were beaten during the robbery. The incident happened at 9:30 p.m. Saturday at the Coliseum Station in Oakland aboard a Dublin/Pleasanton-bound train. BART spokeswoman Alicia Trost said there were a total of seven robberies on the train. “We had one purse, one duffel bag and five cellphones stolen,” said Trost. “No weapons were reported.”

All of the teens[4] fled into the surrounding neighborhood before the police even knew what hit them. The agency was in the process of gathering security camera footage of the suspects, but will not release it to the public as the suspects are all juveniles. Last week, BART announced the hiring of new Police Chief Carlos Rojas, who is looking to increase the number of police officers on trains and in stations. The agency is also in the process of replacing decoy cameras on trains with real ones after a 19 year-old was shot and killed aboard a train at the West Oakland station with no video evidence. It’s just irresponsible they didn’t have real cameras on there to begin with. Criminal even. Only six of the nine cars on the train had working surveillance cameras. And someone knew it.

Some of the robbers apparently held open the doors of a Dublin-bound train car while others streamed inside, confronting and robbing and in some cases beating riders. “I’ve been there 24 years and this is the first time I’ve heard of anything like this happening,” said Keith Garcia, a BART police officer and union president. It only took police officers five minutes to respond to the train, but it wasn’t fast enough.

Last month, according to two television reports, a swarm of teenagers invaded a carnival near the Oakland Coliseum, beating workers and stealing prizes from the game booths. Robberies involving small groups invading stores and restaurants in the Bay Area are not unheard of. But incidents involving such large groups are rare. Gee, Oakland is such a great place to live… not. Roving gangs evidently are a thing there.