Model ARRESTED In Saudi Arabia For Walking Streets In Short Skirt – Where Are The Feminists Now?

Saudi Arabia’s morality and clothing police have arrested a young woman who recorded herself[1] in an archaeological site dressed in a miniskirt and crop top, setting off a furious debate about the rights of women in the controlling kingdom.

In a series of short videos posted online, the unknown woman is seen walking through an ancient fort with her long hair NOT covered up, as well as her midriff EXPOSED. She is seen generally from behind but in one clip she faces the camera so all can see her ugliness and even strokes her hair as a western devil would do! 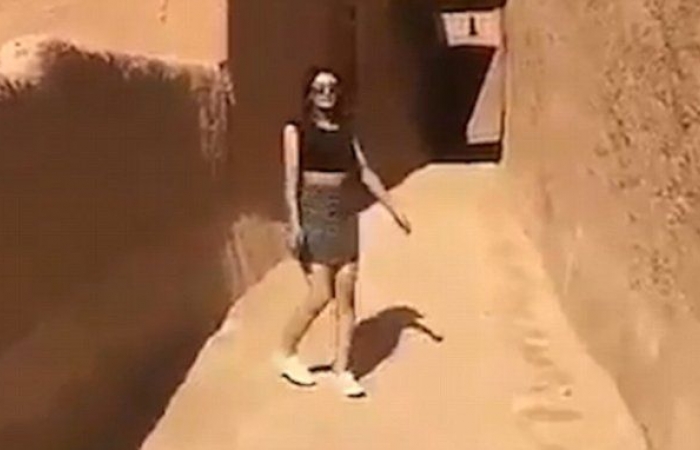 The videos led to a social media controversy in Saudi Arabia, where most women are prohibited by law from appearing in public without a long abaya and their hair being tucked under a headscarf.

Police in Riyadh proclaimed on Tuesday that they had arrested the young woman on charges of wearing “indecent clothing” and were in the process of questioning her.

A police spokesman said the woman acknowledged it was her in the video clips, but that it was someone else who actually put the videos online.

She said that she had been attended by a male chaperon on the trip and had not trespassed one of the most strict Saudi laws that prohibit women from traveling by themselves.

‘The case is now in the hands of the public prosecutor who will decide whether to charge her with a crime. She faces fines and potential prison time if convicted of flouting the kingdom’s morality laws.’

‘The videos did not appear to be intended as a protest against Saudi Arabia’s restrictions and looked more likely to be the work of young people in a country that is deeply conservative but also has high rates of social media use.’

‘Both supporters and detractors of the young woman took to Twitter to debate the video. The storm over the miniskirt comes at an unwelcome time for Mohammed bin Salman, Saudi Arabia’s ambitious young crown prince, who is trying to present his country as in the process of modernisation.’