If you’re reading this, chances are your childhood consisted of hours and hours spent outside in the sunshine, running around and playing unsupervised — and chances are also good that you’ve deprived your own children of that freedom because it’s “too dangerous”. Consider what happened to Debra Harrell, who committed the unthinkable crime of allowing her daughter to play unsupervised in a park over the summer. 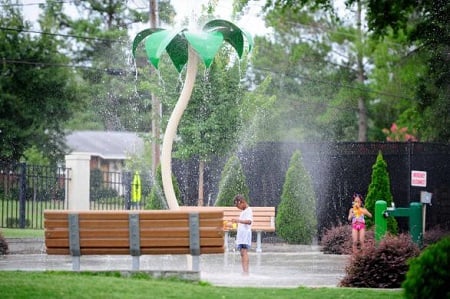 Here are the facts: Debra Harrell works at McDonald’s in North Augusta, South Carolina. For most of the summer, her daughter had stayed there with her, playing on a laptop that Harrell had scrounged up the money to purchase. (McDonald’s has free WiFi.) Sadly, the Harrell home was robbed and the laptop stolen, so the girl asked her mother if she could be dropped off at the park to play instead.

Harrell said yes. She gave her daughter a cell phone. The girl went to the park–a place so popular that at any given time there are about 40 kids frolicking–two days in a row. There were swings, a “splash pad,” and shade. On her third day at the park, an adult asked the girl where her mother was. At work, the daughter replied.

The shocked adult called the cops. Authorities declared the girl “abandoned” and proceeded to arrest the mother.

Watch the news: It sounds like Debra Harrell committed a serious, unconscionable crime. The reporter looks ready to burst with contempt. But what are the facts? She let her daughter play at the park for several hours at a time–like we did as kids. She gave her a daughter a phone if she needed to call. Any “danger” was not only theoretical, it was exceedingly unlikely.

But, “What if a man would’ve come and snatched her?” said a woman interviewed by the TV station.

To which I must ask: In broad daylight? In a crowded park? Just because something happened on Law & Order doesn’t mean it’s happening all the time in real life. Make “what if?” thinking the basis for an arrest and the cops can collar anyone. “You let your son play in the front yard? What if a man drove up and kidnapped him?” “You let your daughter sleep in her own room? What if a man climbed through the window?” etc.

The interesting thing is that every time these stories pop up in the news, people are understandably outraged — yet, how many parents actually realize how ludicrous their behavior is and allow their children to play unsupervised outdoors? Crime rates are the lowest they are in decades, but Nancy Grace and helicopter parenting are still far more popular than they should be, and as long as the helicopter parents persist in not allowing their children, or anyone else’s, to have an actual childhood, then these stories will continue to happen.