They say Hell hath no fury like a woman scorned, and Corrinne Latraverse proved that saying true. After catching her husband cheating on her, she decided to get back at him… by burning down his house. 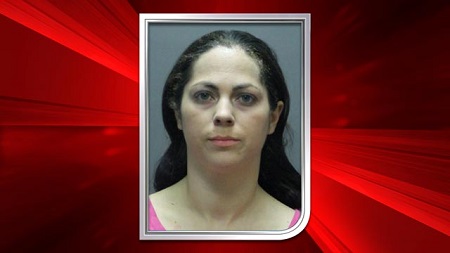 Corrine Latraverse, 30 was indicted on charges of first-degree arson in Providence court on Wednesday for the incident which injured two firefighters and killed a cat.

A patrolling police officer was the first to report the fire that broke out in the Woonsocket house around 4pm on March 15.

Officer Scott Breguet found Latraverse with her three children – ages two, nine and 12 – safely outside the home with their two dogs.

Latraverse’s hair was singed and she had burn marks on her jacket. The family was taken to Rhode Island Hospital and treated for smoke inhalation.

Another witness said the couple living in the apartment had been having ‘domestic issues’ and had bought the property to ‘fix things’ after they both cheated on each other.

Latraverse allegedly got into a fight with her boyfriend of 15 years the day before the fire when she caught him talking on the phone with another woman.

… Her boyfriend was still at work when she doused the hallways with gasoline and set the home on fire.

… Two firefighters received minor injuries when they fell through a floor inside the home engulfed in flames.

This woman deserves a pretty steep punishment, because not only did she destroy property, she injured two firefighters, killed a cat, and perhaps worst of all, put the lives of her children at risk. Now her children are homeless and will be forced to grow up in the foster system, and for what? Some pitiful attempt at revenge?