What kind of person must you be to close the door on children bleeding and begging for help? It’s unfathomable, yet that’s exactly what one neighbor did when three bleeding kids came to their doorstep trying to escape from their mother’s murderous rampage. 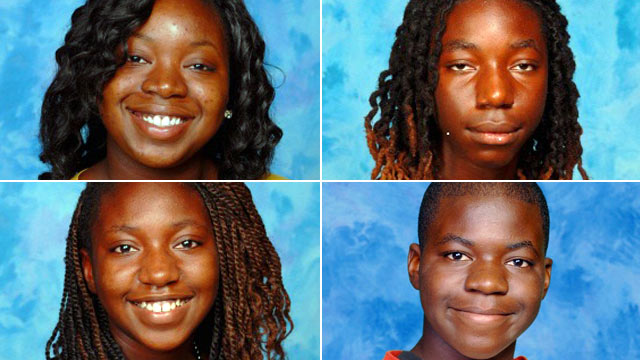 The neighbours of the Florida woman who fatally shot her four children and herself, refused to open the doors to three of the frantic children who had fled to their house.

During a recording of a 911 call made by the neighbours on the night of the attack by Tonya Thomas, 33, a crying female caller can be heard to say, ‘Get back, you’re not coming in our house.’

The caller’s husband then grabbed the phone and told the dispatcher, ‘They tried to break in our front door to get in, I guess to try and get away from her – who-ever’s got the gun.’

The neighbours made the 911 call as they responded to hearing gunfire coming from the property next door and went downstairs after their front door was knocked.

‘I knew this was gonna happen you guys,’ the crying female caller told the dispatcher as the deaths of Joel, 12, Jazlin, 13, Jaxs, 15, and Pebbles Johnson, 17 unfolded in front of their eyes.

During the chaotic phone call to dispatchers, the husband tells them that he is armed and willing to defend his house from the injured children trying to flee their murderous mother.

‘I grabbed my gun and ran outside and one’s laying there bleeding at the front door,’ the man is heard to say.

‘I don’t know who has the gun, so I’m not walking out there.

‘I’m armed, but not going out there and putting myself in danger.’

After asking the husband where the bleeding child had gone, the caller responded that ‘he went back to the residence.’

Soon after this the police arrived at 7245 Bright Avenue in Brevard County to see Thomas standing in the doorway of her front door holding a gun, before she went back inside.

Then the deputies discovered Pebbles lying fatally injured in the front yard of her house.

Shots were heard to ring out and as the deputies entered they discovered Jaxs, Jazzlyn, Joel and Tonya’s bodies shot to death.

Authorities said they have no motive for the killings and are not sure why the children followed the mother’s orders to return back to their house.

… Neighbour Travis St. Peter, told Florida Today that the family was known in the area for being disruptive, with police often being called to the house.

‘They were just known for being hoodlums,’ he said of the children, adding that they were often seen running around late at night, ‘terrorizing our dogs and setting off firecrackers’.

Jamie Hudson, whose mother lives two doors down from the family, told the Miami Herald that the boys in the family were known to shoot BB guns at a home across the street and had threatened to set it on fire.

Teenagers misbehave sometimes — it’s part of being a teenager — but that doesn’t mean that they deserved to be left alone to die when they needed help. There is no doubt that these neighbors have blood on their hands now.