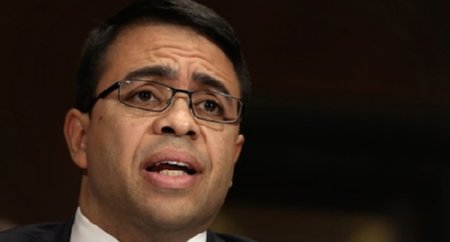 It took the “nay” votes of: seven Democratic senators: to do it, but President Obama’s controversial nominee: to: head the Justice Department’s: Civil Rights Division: was defeated by a 47-52 vote Wednesday afternoon.

Debo P. Adegbile: gained notoriety during his association with the NAACP Legal Defense Fund when he volunteered to defend Mumia Abu-Jamal, the murderer of Philadelphia cop Daniel Faulkner in 1981.

While everyone is entitled to a vigorous defense, Adegbile described his role as Abu-Jamal’s defense lawyer as “a great honor,” prompting U.S. Sen.: Ted Cruz, R-Texas, to make an impassioned floor speech urging the body to reject the nomination.

The president excoriated the vote, calling it “a travesty based on wildly unfair character attacks against a good and qualified public servant,” according to: Roll Call, which reported:

Both of Pennsylvania’s senators, Democrat Robert Casey and Republican Pat Toomey, announced their opposition, according to: Fox News.

“I respect that our system of law ensures the right of all citizens to legal representation no matter how heinous the crime,” Casey said in a statement.

“At the same time, it is important that we ensure that Pennsylvanians and citizens across the country have full confidence in their public representatives – both elected and appointed. The vicious murder of Officer Faulkner in the line of duty and the events that followed in the 30 years since his death have left open wounds for Maureen Faulkner and her family as well as the city of Philadelphia. After carefully considering this nomination and having met with both Mr. Adegbile as well as the Fraternal Order of Police, I will not vote to confirm the nominee.”

This post was used with the permission of Bizpac Review[2]