These have got to be two of the most unlucky criminals on the planet. They walked into Rising Sun Pizza, announcing their plan to rob the place. What they didn’t know was one of the patrons of the restaurant was an off-duty police officer. [1] 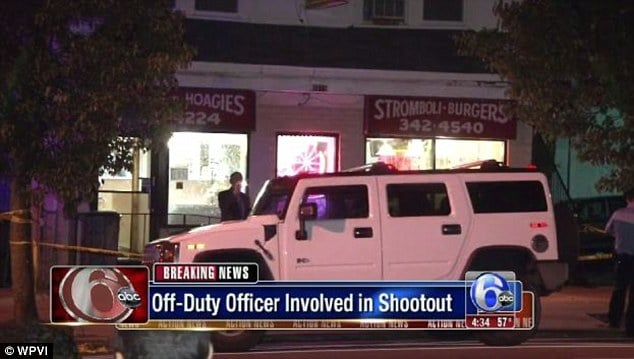 An off-duty detective is said to have been picking up takeout food at a pizza shop before stopping a robbery in a close-quarters shootout that left one of the suspects dead.

Two men entered Rising Sun Pizza, where an officer was waiting for his Stromboli, just before 11.30pm on Thursday, according to Philadelphia Chief Inspector Scott Small.

They put a gun to the head of the off-duty detective, took $20 out of his hands and forced him to the floor.

As the two announced they were robbing the family-run shop, the detective identified himself and pulled his weapon, a Glock handgun.

Small says that’s when one of the suspects fired at least two shots from point blank range but narrowly missed the off-duty officer.

The detective returned fire and the two suspects then fled.

One collapsed dead in the parking lot after being hit in the torso; the other escaped.

A revolver used by the bandits was dropped in the shop, according to the Philadelphia Daily News.

Police are now looking for a suspect in his twenties who wore a dark hooded sweatshirt.

The detective, the 22-year-old pizza shop owner and an employee were unharmed.

It is not known whether the second suspect was struck during the gunfight.

Thank goodness no innocents were harmed. However the one thug who was killed is going to have a lot to answer for when he gets to the Pearly Gate. I wonder where his stupid friend went….
Endnotes: