Richard Deleon, 47, sustained multiple injuries when a couple of 17 year-olds ambushed his cab at a red light and began hacking at him and his three passengers with machetes. One of those injuries resulted in the Bronx man losing his thumb.

Juan Carlos Sanchez and Kenneth Guzman attacked a store clerk before running away and targeting the stopped cab. They took aim at everyone in the car, passengers and driver included. 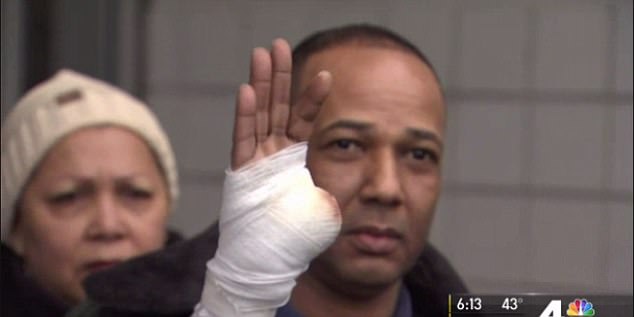 “I raised my hand and they were aiming at my head with the machete and instead they took my (right thumb),” said Deleon, describing the attack. It was clear that these teens meant to either seriously maim these people, or flat out kill them. At least the driver, anyway, because isn’t that the entire point of aiming for the head?

But when they were caught and detained, the judge did something so insulting and offensive that I can’t honestly believe that it’s legal.

He set the bail of one of the boys for a mere $200, so the kid could spend time with his family for Thanksgiving. Yes, leniency was given to someone who injured 4 people and could very easily have killed someone.

So while Guzman – a murderous brat – is laughing it up with his family over some turkey and ‘taters, this cabbie is depressed and in pain. Also, he can’t return to work with his injury, which is making it really hard for him to make ends meet and keep a roof over the heads of himself, his wife and his children.

“The biggest crime in this case was committed by the judge who released one of these guys on $200 bail after they slashed three or four people and could have killed someone,” he continued.

While the teens are still being charged with assault and criminal possession of a deadly weapon, it was completely unfair of the judge to let one of them out with such low bail. It’s an insult to their victims who were undoubtedly traumatized after being attacked by a man with a freaking machete. If Guzman wanted so badly to spend Thanksgiving with his family, maybe he should have – I don’t know – not attacked innocent people?