Police arrest mom, 35, after she ‘locked herself in Manhattan mid-town restaurant bathroom and smothered’ her 1 year old son to death

When a mother kills her own son and then tries to blame the devil for the crime, is she crazy or just trying to get her insanity defense ready? That was Latisha Fisher’s excuse, after she locked herself in a restaurant bathroom in Manhattan and then smothered her son to death. 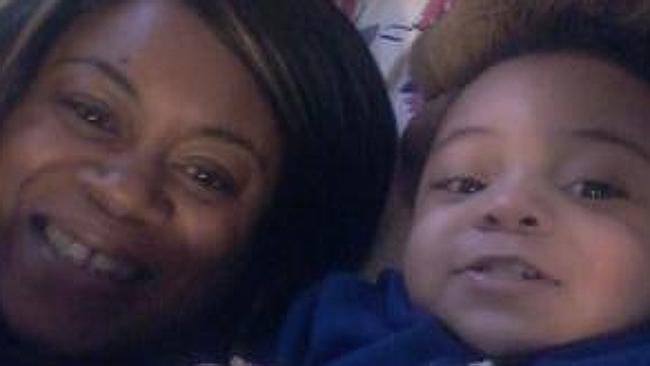 A mother has locked herself in the bathroom of a busy Midtown Manhattan restaurant and smothered her 20-month-old son to death with her bare hands before shocked employees could burst in and stop her, police say.

As Latisha Fisher was being led away from the 5 Boro Burger joint on West 36th Street about 2.30pm on Monday, she blamed the devil for killing Gavriel Ortiz and then trying to stop workers who attempted to resuscitate him.

‘I would describe her as soulless. She put her hand over his mouth and smothered him,’ a police source told the New York Daily News.

Witnesses said Fisher was emotionless after the death of her child.

She claimed that she had put her hand over the boy’s nose and mouth to put him to sleep, police say.

Workers at the restaurant became alarmed Monday afternoon when a line grew outside the restroom.

When employees burst in to see what was wrong, they found Gavriel in his mother’s lap – unconscious and foaming from the mouth.

A male employee performed CPR until paramedics arrived – despite the mother swatting help away. Unfortunately the aid was too late for the little boy who was later pronounced dead at Bellevue Hospital.

Police immediately took Fisher into custody and transported her to the Midtown South Precinct.

While she certainly sounds insane, her neighbors reported smelling marijuana coming from her apartment, and that she had been fighting with her boyfriend and the father of the baby over the past few months. With that kind of information, it makes the insanity idea seem a little less plausible.