Everyone from Al Sharpton to Eric Holder to Barack Obama to Bill de Blasio has been out there smearing the police, implying that they’re thugs and racists and tearing them down at every opportunity. Now some nut who was influenced by all this anti-cop rhetoric murdered two NYC cops as a direct result. Understandably, police officers in New York are furious about how they’ve been vilified for doing their jobs and are especially incensed that their own mayor has been one of the worst offenders[1]. 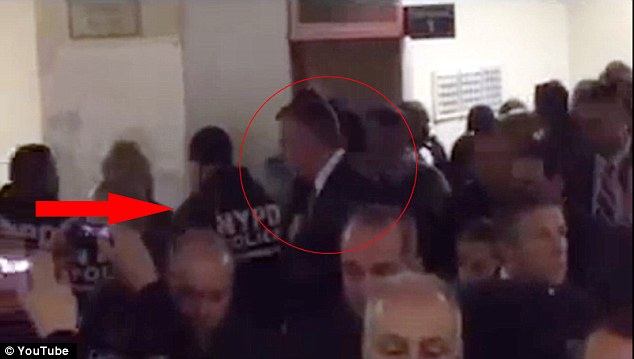 Many are blaming the murder of two New York City cops on Saturday afternoon on Mayor Bill de Blasio following his recent support for protesters in the city marching in opposition to a grand jury’s decision to not indict the police officer who killed Eric Garner.

Hundreds have taken to social media to say that de Blasio has ‘blood on his hands’ and should ‘be charged with murder’ after the two men were killed ‘execution style’ in Brooklyn.

What’s more, many feel that de Blasio should not attend the officers’ funerals, this after many members of the NYPD signed a petition asking that the Mayor not attend their service should they be killed in the line of duty in light of his recent actions.

This as hundreds of NYPD members turned their backs on de Blasio as he entered a news conference Saturday afternoon.

These same officers later lined the streets outside the Woodhull medical Center and silently saluted as the bodies of the two slain officers were taken away.

Pat Lynch, president of the Patrolmen’s Benevolent Association, said in a statement; ‘That blood on the hands starts on the steps of City Hall in the office of the Mayor.’

…(Retired NYPD detective Harry) Houck then attacked the Mayor for not supporting the leadership in the police department, saying that he should not show up at the funeral or these two officers.

Furthermore, he said Saturday’s killings were inevitable as the protesters wanted to ‘take out a cop for Eric Garner.’

He then added, ‘I’ve been waiting for something like this to happen.’

Houck later said that he believed police morale was the lowest he had ever seen it in 30 years.

…Former New York City Police Commissioner Bernard Kerik told Newsmax; ‘De Blasio, Sharpton and all those who encouraged this anti-cop, racist mentality all have blood on their hands.’

He later said; ‘The lawless have been encouraged by the Mayor.’

Cops aren’t perfect and they deserve to be criticized when they do the wrong thing, but the Left has moved beyond to whipping up hatred against the police just because they’re doing their jobs. Now, two officers are dead as a result.