Latin American prison security is rightly recognized as something of an oxymoron, as evidenced by the amazing escape of Joquin Guzman, also known as “El Chapo,” from a Mexican maximum-security correctional facility.

But it appears that even South American prisons have the ability to stop elaborate escape attempts by inmates – so long as they don’t involve the multimillion-dollar tunnels El Chapo built. 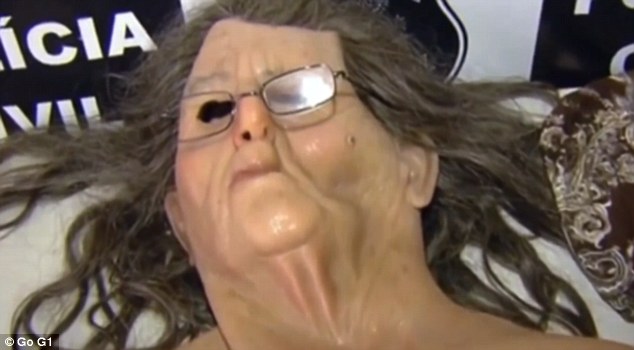 This is the unbelievable moment a brazen drugs trafficker attempted to escape a Brazilian prison dressed as an elderly woman in a silicone mask, wig and floral dress.

Clodoaldo Antonio Felipe, 44, who is serving a 36-year sentence, disguised himself as a 70-year-old and attempted to walk out of Coronel Odenir Guimaraes Prison in the city of Aparecida de Goiania.

The prisoner was captured on CCTV following relatives of other inmates as they made their way out of the building after visiting time.

The man made it someway before his bulky body and quick stride aroused the suspicion of a prison guard, who approached him at the metal detector – the last security checkpoint.

The guard attempted to reach over and grab the disguised prisoner, who ignored and tried to make a run for it before being detained.

Following the incident, police released photos of the elaborate facial disguise, estimated to have cost nearly £1,000.

Prison director Alex Galdioli said: ‘We’ve had several cases of inmates disguising themselves as women but never with a disguise as perfect as this.’

Police chief Andre Veloso added: ‘The guard didn’t recognise the old lady but never imagined it would be a prisoner trying to escape.

And there’s video of this foiled caper…

Felipe isn’t the smartest crook in the world; that’s for sure. Old ladies don’t walk like John Wayne.