Not sure where this happened[1], but that’s a QT, so it could be Tulsa or Oklahoma City. This used to be a great state. Not so much anymore. Two guys were fighting outside a QT… a white guy and a black guy. If I had to wager, I’d bet the black guy picked the fight. At one point, a 72 year-old man stepped in and told the black punk to get his ass out of there. That’s when the pack closed in on the guy. A black thug punched the man in the face. He stood his ground… age doesn’t matter, that’s one tough guy. Then another guy came in and dispersed the thugs. A white young man came out, dropped his pack and confronted the thugs for hitting an old man. Another fight looked like it was blossoming when a guy stepped in and stopped it. I guess the pack knew the police were on their way, because they took their cell phones and left. Animals. 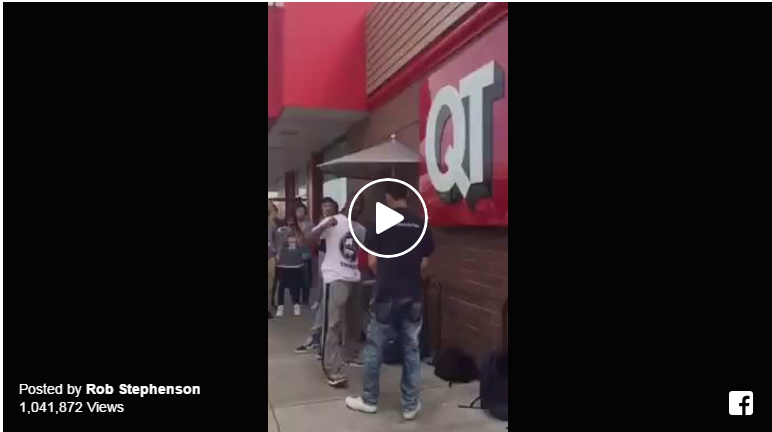 Welcome to Obamaland, where thugs have no shame and punch old men in the face. You have to see this to believe it. Watch as these thugs brawl outside of a QT restaurant and what they do when this man tries to break up the fight.

Turns out that is Owasso… which is not far from where I live. Bonus, a guy walked into hubby’s office Friday hopped up on PCP. No one was hurt, but they could have been. That’s Tulsa. Man, I have got to get back west. This is just nuts. The son of the 72 year-old is vowing this will be dealt with. I can’t say I blame him. Welcome to Obama’s America – where even the nicest of places are now turning into violent hellholes. The police should have arrested those thugs. The video is out there as evidence. It’s getting dangerous out there more and more. This is Oklahoma… those thugs were lucky they only got yelled at. They deserved much more. To be continued no doubt.

Isn't Owasso great???? This is some chicken shit kids that punched my 72 you dad. Yes that is my dad getting hit! This will be delt with.