Serial drunk driver who ‘crashed into mother and her child, 2, but was let off & kills boy, 6, two hours later

The decision to drive drunk is generally reviled in our society, and it’s because of lowlifes like this one. Blaine Boudreaux went on a drunk driving rampage, and the carnage he left in his wake left a six-year-old boy dead. 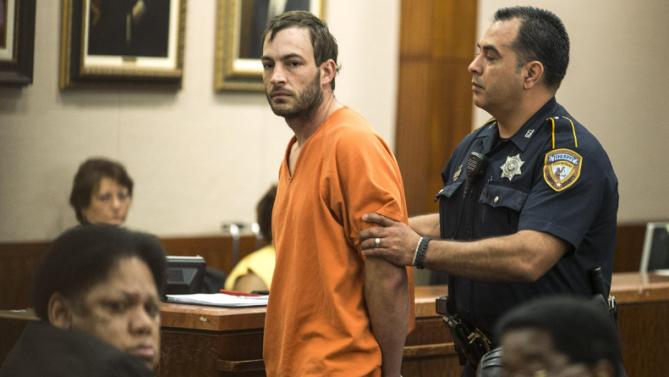 Police in Houston say a 34-year-old man got behind the wheel of his car while under the influence Sunday, leaving a path of destruction in his wake and killing two people, one of them a 6-year-old boy.

Blaine Boudreaux has been charged with intoxication manslaughter, intoxicated assault and failure to stop and render aid involving death in connection to at least three separate DUI collisions that took place within three hours in Houston.

Boudreaux, who also has an extensive DUI record in his native Louisiana, was allegedly drunk when he ran a red light on Lockwood Drive at around 6.3opm and slammed his Dodge pickup truck into a Honda Civic.

Joshua Medrano, 6, who was a passenger in the sedan, was fatally injured. His mother, Cynthia, was hospitalized with a punctured lung and broken bones.

Boudreaux was arrested at the scene after failing a field sobriety test.

Several hours earlier, according to police, the 34-year-old man struck and killed 61-year-old vagrant Leonard Batiste walking along Texas 5 Spur near the University of Houston.

Investigators say the homeless man was mowed down at around 5.15pm Sunday but his body was not discovered until Monday afternoon. Boudreaux’s entire bumper, complete with his license plate, was found nearby.

Blaine Boudreaux also has been linked to a third collision that occurred about two hours before Batiste’s death.

The two-car crash took place in the 6600 block of Fannin Street and involved a mother and her 2-year-old child, who were taken to a hospital and later released.

In that case, Boudreaux was issued a ticket by a police officer and allowed to leave the scene.

After slamming into the elderly man on Texas 5 Spur, Boudreaux allegedly dozed off behind the wheel and didn’t wake up until another driver honked at him to get his attention.

That is when he ran the red light at the intersection of Lockwood and the East Freeway and slammed into Cynthia Medrano’s black Honda, killing her son, according to officials.

It must be heart-wrenching for this mother to know that her son’s death could have been avoided, if only he had not been allowed to leave the scene of his earlier accident — or had his license revoked in Louisiana over his DUIs. Because of this man’s actions, two people are dead — and he should never be allowed to see the light of day as a free man again.