She Claimed Sexual Harassment, So He Waited Outside Work, Then Shot Her Dead, Now He’s…

Some people are psychopaths with nothing but evil in them. And Christopher O’Kroley, who killed his co-worker in cold blood, is one of those people. 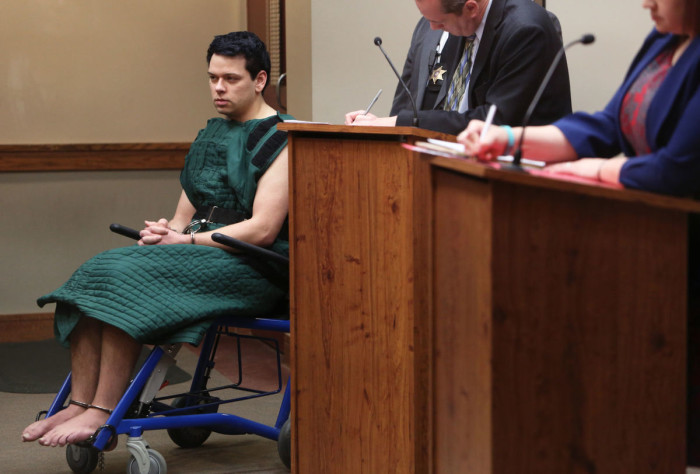 Christopher O’Kroley, 26, is accused of shooting dead 24-year-old Caroline Nosal at Metro Market Cottage Grove in Madison on Tuesday, a day after he was fired from his job.

Coworkers described the relationship between O’Kroley and Nosal, of Stoughton, as one that soured after O’Kroley ‘wanted more’.

O’Kroley’s bond was set at $1million on Friday after he was pushed into the courtroom in a wheelchair while wearing a suicide-prevention smock, according to WKOW. An anti-suicide smock is a tear-resistant noose-proof form of clothing that officials put detainees in if they are on suicide watch.

He was also charged with first-degree reckless endangerment.

Two weeks before the shooting, O’Kroley was suspended from work after Nosal told a store manager that she was being harassed by him.

O’Kroley told police that following his suspension, he began planning to kill Nosal and himself if he was fired, according to the Wisconsin State Journal.

He also told police when he was arrested on Wednesday that he would have shot Nosal to death a day earlier but he wanted to practice shooting the gun he had bought Monday before using it.

He went to their workplace Monday evening after practicing, but Nosal had left work. So O’Kroley went home, watched movies and ordered pizza before returning the next day to attempt the shooting again, police said.

He returned to the market on Tuesday and shot Nodal in the head and abdomen as she walked through the parking lot as she left work, a criminal complaint said.

O’Kroley had learned through former co-workers via text message – on the pretext of collecting his belongings from the store when Nosal was not there – that Nosal finished work at 8pm on Tuesday.

He told police that he knelt down beside her car, and when he saw Nosal turn the corner, he stood up and shot at her chest.

When she fell, he shot her once more in the head, he told police.

He said that it was ‘easy’ to kill Nosal because she had ‘ruined my life’, and that he killed her out of anger. He described himself to police as a ‘sociopath’.

‘I killed Caroline and I’m about to kill myself. So don’t be surprised when I don’t respond anymore,’ O’Kroley wrote in a text message to a coworker after the shooting.

But he realized that he couldn’t kill himself, he told police, and that his plan was to ‘hijack someone’s car at gunpoint’, but he instead fled the scene in his own car.

O’Kroley was arrested on Wednesday about four miles from an area where his car was found abandoned. Police used K9s and a drone to search for him, according to Channel 3000.

He exchanged gunfire with Madison Police Officer Michele Walker before he was arrested, which led to a first-degree reckless endangerment charge on Friday.

So now O’Kroley is in prison, wearing a suicide smock, consigned to a wheelchair, and will probably be in prison for the rest of his life. It’s a fitting end for a monster who doesn’t deserve to ever walk free again.