Smug Kid Cuts Off The Wrong Car, He’s Not Laughing When He Sees Who Gets Out [VIDEO]

This confrontation is just off the charts nuts.[1] I’m not sure who is at fault here… but I suspect it’s both of them. A young guy and his girlfriend claim they were on a dirt road and this combat vet was riding them from behind. They couldn’t go any faster because of two trucks in front of them. The combat vet, Huntsinger, claims he tried to pass and the kid, Vega, ran him off the road. Vega pulled over and Huntsinger came up to his car and started yelling and cussing at him. He then hit Vega in the face, but the kid refused to fight back. It got worse from there.

Huntsinger hit Vega a couple of times and kept walking back to his car. Vega’s girlfriend, Engelhart, just would not shut up and kept egging the situation on. She’s lucky no one got seriously hurt. Huntsinger had a wife and child in his truck as well. It was very tense and violent. And all over something as stupid as road rage… over a very minor incident on a dirt road. Just stupid. 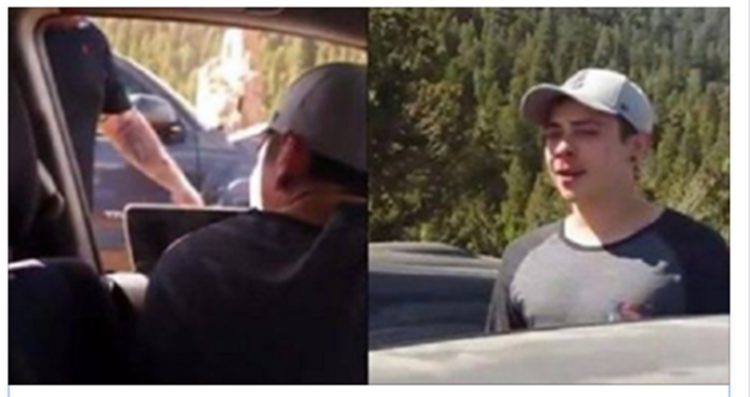 In the intense clip, Brandon Vega can be seen arguing with a man about a traffic incident involving both parties.

“I am a combat veteran,” the man, who identified himself as Chad Huntsinger, says to Vega and his girlfriend Lyfe Engelhart, who captured the video. Huntsinger proceeds to hit Vega in the face.

“He didn’t do anything!” Engelhart says.

Vega needs a new girlfriend, that’s for sure. She could have gotten both of them killed. El Paso County, Colorado, authorities are now investigating this whole incident. Engelhart posted the video to Facebook and stated that Vega would not fight back even though Huntsinger attacked him several times. “If that person stays engaged with you, we recommend, make the next right turn, move out of the area. it’s not worth confronting someone over an act that occurs when you’re driving a motor vehicle,” Police Lt. Howard Black advised viewers in an interview with KRDO.

Road rage many times leads to homicide. I don’t think those kids realize just how dangerous their situation was. A number of readers feel the same way I do… that both are at fault here. Confronting someone like that or mouthing off to someone in that manner could very well get you shot. The girlfriend claims the vet is disabled, but never saw combat. He has a history of violent assault. Another reason not to poke the badger and know when to shut your pie hole.