A teenage beauty queen and her older friend, stupidly live-streamed her and a friend drinking and driving in the Ukraine. I say stupidly because now they are both dead, have lost control of the car and smashed it to a pulp[1]. The only good news out of this story is that the drunks behind the wheel didn’t take out another vehicle with them. 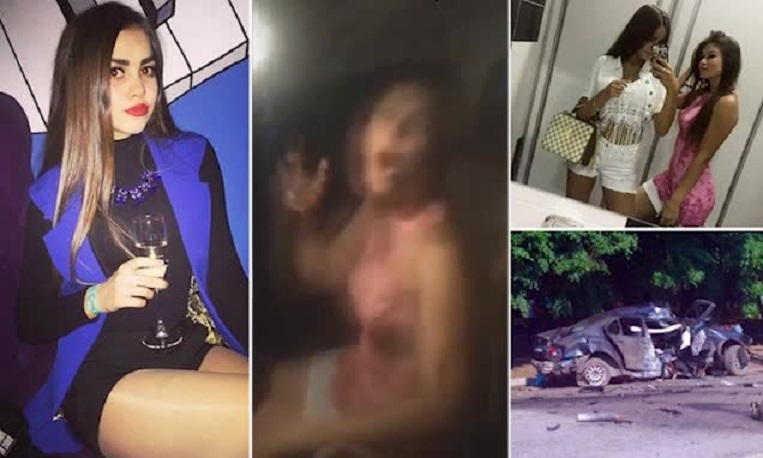 Sofia Magerko, 16, and Dasha Medvedeva, 24, were drunk and driving at high speeds and drinking alcohol when their BMW car crashed head-on into a lamppost in the Ukraine.

Sofia was the winner of a local beauty contest in her home city of Izyum and was the first killed upon impact in the tragedy, according to the investigation done by police.

Atrocious photos showed the mutilated wreckage of the car on the side of the road in the Kharkiv region.

Her friend, seen swerving unpredictably on their vlog, passed away en route to the hospital. The video displayed the pair, drinking from bottles, and hooting for joy in obvious high spirits moments before the accident, with one of them saying to the camera,’Hi boys.’

The girls were screaming and joking, saying how much they ‘enjoyed life’ right before they were heard screaming and then crashing, which killed them. The torturing sound of the car crashing into the lamp post can be heard on the footage, it then immediately goes black at the moment of impact.

It doesn’t take long before subsequent bystanders are heard arriving at the scene and coming to the realization that there is at least one death.

On the full video, you can hear a man say: “F***, there is a dead body there… another one fell out of the car.”

Apparently talking to the emergency services number, he can be heard saying: “Please come fast, a car crash here.” He goes on to describe the location, saying: “Izyum, Lenina street, seems that fatalities here… One girl. Two girls here.”