Okay, so it doesn’t quite roll off the tongue like “no justice, no peace” and sure it doesn’t actually make sense given that capitalism and the justice system aren’t linked in any meaningful way, but hey! It made for some great television, didn’t it? 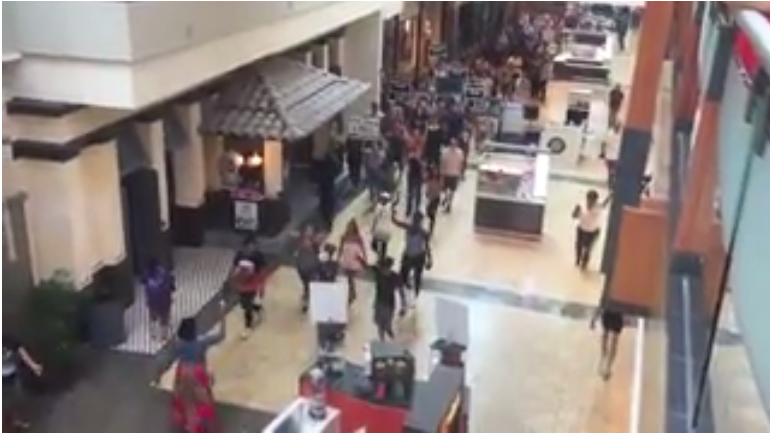 Those who wished to protest the acquittal of a police officer in the shooting death of a black man in St. Louis gathered in the streets and eventually took their message to a shopping center, shouting “No Justice, No Profits.”

Stores who were afraid of potential violence shuttered their entrances and closed down for the day as people marched through the halls of the mall. Thankfully, everyone remained peaceful until they were forced out of the mall by police officers who were attempting to get ahead of any potential violent action against stores.

When you need to protest, but a heatwave comes to #StLouis[2] – take it to the mall! #WestCountyMall[3] #STLVerdict[4] #STL[5] pic.twitter.com/ddpTYPhVFy[6]

Republican Gov. Eric Greitens prepared for this exact scenario, however, having learned from Ferguson. In anticipation of the verdict, he met with the victim’s fiancee, black state legislators, St. Louis faith leaders – also black – and law enforcement to make it clear that peaceful protesting would be perfectly acceptable, but violence will absolutely not be allowed to take place in the city. He also put the National Guard on standby in the event that the protests went south in a hurry. Some troops were also deployed to “critical infrastructure” like fire departments and police put up barriers around their stations as well as the courthouse.

A few of the more agitated rioters did end up throwing things at the officers who wore flak jackets and helmets, but for the most part they were kept back by pepper spray.

The most violent things got were rioters blocking a bus of riot officers, throwing rocks and various projectiles at a police cruiser, causing damage and splattering red paint on and breaking a window at the home of Mayor Lyda Krewson. Police used tear gas to clear out that area, making nearly 24 arrests before dark, though they haven’t provided an updated number recently.

Before the end of the night, 10 police officers suffered injuries including a broken jaw and dislocated shoulder. Journalists on the scene also reported having their equipment damaged by rioters.

Prayers for the injured officers and those who have to deal with this in the days to come.