As if Brock Turner wasn’t enough of a monster, police have now released details that make his case even worse. In addition to sexually assaulting an unconscious girl, he allegedly took a picture of her breasts and sent it to his friends. 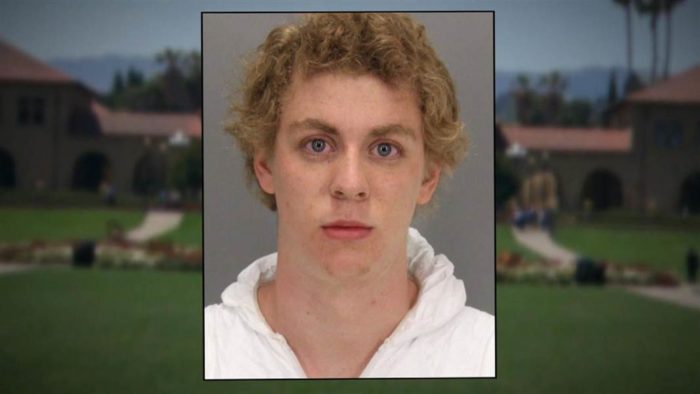 Stanford rapist Brock Turner sent a photo of his victim’s breasts to friends after the attack outside a frat house party.

Court documents seen by Daily Mail Online reveal that the disgraced athlete was sent a text via a group messaging app shortly after his arrest that read: ‘Whos tit is that’.

The message, which arrived through the GroupMe app, was sent by Stanford swimmer Justin Buck, originally of Aberdeen, UK.

Detectives were unable to access the photo sent by Turner. Pictures sent on it can be deleted by third parties. It is unclear who deleted the photograph.

… Part of a section on cell phone extraction, which also covers the messages exchanged by Turner and his high school friends about drug taking, it reads:

‘Shortly after the Defendant’s arrest in the early morning hours of January 18 2015, Detectives noticed a text message in the ‘Group Me’ application that appeared on the Defendant’s phone.

‘It stated: ‘Who’s tits are those?’ [sic]. A search warrant for the Defendant’s phone was obtained and it was searched by the Santa Clara County crime lab.

‘Detectives were unable to locate the text from the ‘Group Me’ application or any photos related to that text.

‘However, they learned that when there is a third party application, the images are not stored in the phone and can be deleted by a third party member in the group.’

It is unclear who was a member of the group beyond Buck and Turner.

Blake Bolton, a witness who was visiting Stanford on the weekend of the sex attack, later told police that he had seen a man standing over the victim with a phone.

In his statement to cops, Bolton said ‘the male subject was standing over her with a cell phone. The cell phone had a bright light pointed in the direction of the female, using either a flashlight app in his phone or its built-in app.

‘He approached the subject and asked if everything was okay. The male subject did not say anything to Bolton.

‘He told the male subject to roll her over onto her side to breathe. The male subject did not do this. Bolton then got on his knees and checked her pulse.

‘When he got back up, the male subject was gone.’

The police report also notes that a silver iPhone was found close to the victim, with its blue cover lying discarded close by.

Turner’s phone records have come under scrutiny in recent days, with copies of his text exchanges and photographs of him smoking a hash pipe stored on the device submitted to Judge Persky prior to sentencing.

The 20-year-old, of Dayton, Ohio, repeatedly claimed to be a stranger to drugs and alcohol prior to arriving at Stanford but his lies were exposed through a series of messages referencing marijuana, LSD and MDMA – the powdered form of club drug ecstasy.

And despite all of this evidence, there was his enabler of a father, making excuses and saying he shouldn’t be punished too much for “20 minutes of action”. This guy, he’s a real winner and his parents must just be SO proud.