For a long time, Jared Fogle was known as the Subway spokesman who lost hundreds of pounds eating Subway sandwiches. But then he was caught with child pornography and attempting to arrange sex with minor girls. Fogle is now serving 15 years in prison and he just got a brutal case of prison justice[1] handed to him. 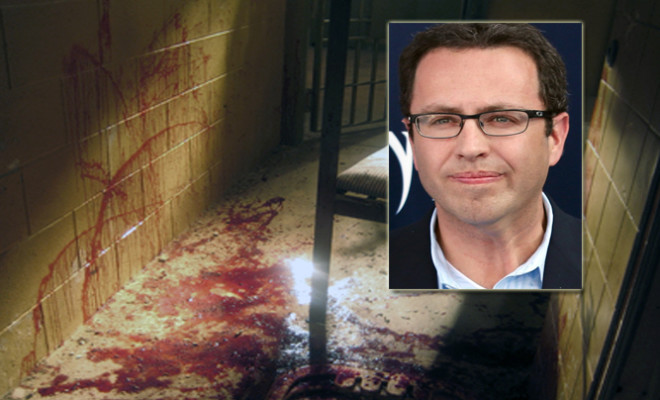 Fogle was attacked in prison by fellow inmate Steven Nigg. Fogle was jumped in the recreation yard and received a brutal beating, leaving him with a bloody nose, a swollen face, and scratches on his neck. Nigg, who is in prison for a weapons charge, defended his actions, saying that Fogle was being treated like royalty by other child molesters in prison and Nigg wanted to teach him a lesson.

“Jared is their hero,” he said. “You would not believe how arrogant Jared was. He hired bodyguards and the other child molesters looked at him as if he was a god.” And Nigg said that, given the opportunity, he would attack Fogle again. So to keep Fogle safe, he was moved 700 miles away to a prison in Oklahoma instead.

The beating Fogle took was so intense, that his family said he’s lucky to be alive.

Niggs’ brother spoke to the media about the beatdown, saying, “He’s sending a message (to pedophiles) is what he’s doing. A guy walks in with all this money and celebrity and instead of flying under the radar, he’s going into the yard, walking around with big guys, saying no one can mess with me, flashing his money around.” Niggs allegedly told him, “I’m doing it for the families. I couldn’t help it.”

For the attack, Niggs lost time off of his sentence, commissary privileges and e-mail, plus was made to spend time in “the hole,” or solitary confinement. But apparently, it was worth it, as Niggs says that he has no regrets.