What a monster this woman is.[1] A Georgia teacher is seen in this video walking down the hall and turning to go into a classroom. She sees a disabled little boy and deliberately knees him in the back and makes him fall violently forward. After he falls hard to the ground with his head snapping back, she picks him up and that is where it ends. What kind of person does this to a little child that has special needs? Evidently the boy was not hurt, but that in no way excuses this woman. She was forced to resign and if I were the child’s mother, I’d seriously consider pressing charges against her. 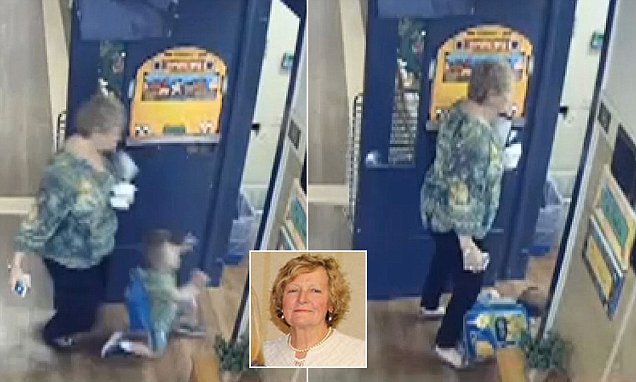 TIFTON, Ga. (AP) — A Georgia teacher has resigned after surveillance video appears to show her knocking a special needs student to the floor in a school hallway.

WALB-TV reports the incident happened at the Tift County Pre-K Center in Tifton on March 17.

The child’s mother, Sarah Patterson, tells the station that the teacher thrust her knee into the little boy’s back, causing him to fall forward near a classroom door.

Schools spokeswoman Stacey Beckham said Amelia Stripling, a teacher for 22 years, resigned the next day. She says an eyewitness said it appeared she intentionally pushed the child. Well, of course she did. It is obvious on the video that was exactly what she did. That wasn’t a nudge… that was a vicious shove. That is a woman who hates children and especially ones that have special needs. This teacher should never be allowed to teach or be around children ever again. Those are the actions of someone who is just filled with hate and resentment. Obviously the superintendent after seeing the video told her she could resign or be fired. She chose the former and her pension. Good riddance.