Holy mother of God who is RAISING these little beasts? How do you, as a teen, engage in what is absolutely considered to be psychopathic behavior? I get that this little monster is from Russia and they have a culture that is different from ours, but I’m going to assume that they aren’t raising them to murder teachers.

Apparently this was part of some disgusting, morbid game called “Blue Whale” that is circulating online and requires people to complete a list of 50 tasks before killing themselves. Police have linked this murder-suicide to games like that, which have convinced hundreds of Russian teens to do horrible things and then take their lives. 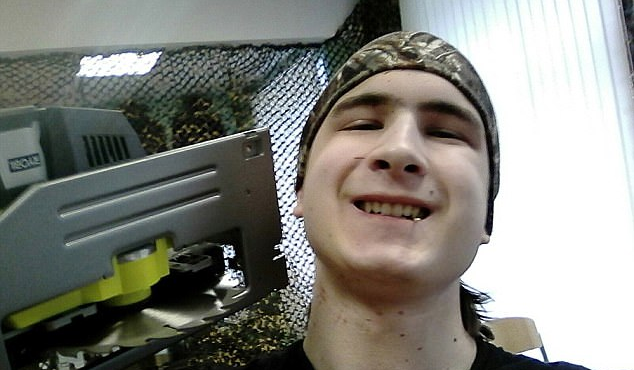 18 year-old Andrey Emelyannikov reportedly slit the throat of his 44 year-old health and safety lecturer – who was a father of three – and then took a selfie with the dead body, allegedly as part of the “Blue Whale” style games which requires “players” to complete a series of tasks before killing themselves.

These games target teens and young people who are depressed and isolated and vulnerable to such influence. Police have reported hundreds of deaths (both murders and suicides) that have been linked to these “games. They did not include any additional details, but local media reported on the attack.

“The murder happened during a break in classes when the student came to his teacher from behind and stabbed him with a knife to his neck,” it’s being said. “Then he posed for several selfies, smirking and looking relaxed with a toothpick nonchalantly in his mouth.”

He then happily killed himself with a circular saw, which he can be seen posing with in the picture above. (I mean, he could have just started with that and saved a family a lot of trouble, but maybe that’s just me.)

A member on one of the forums where the dead teen posted his gruesome pictures noted that the teen had made frightening comments about his health and safety teacher in the past.

“A couple of months ago he complained about his health and safety teacher, even saying that he would kill him sooner or later. But it is a common thing on our forum,” the person noted.

“Our guys often throw out threats to kill somebody, so we don’t pay any attention,” he continued.

Maybe that will change you now, since you knew he was going to hurt this man and leave his children without a father and you did nothing to stop it.

These “games” are absolutely evil and something needs to be done about them. They are preying on impressionable, depressed youth and causing them to do horrible things.