It is one of the most terrifying situations someone can find themselves in: alone in their house, with an intruder breaking in and looking for them. That’s exactly the situation one homeowner found herself in though, and the chilling photos have spread like wildfire across the internet. 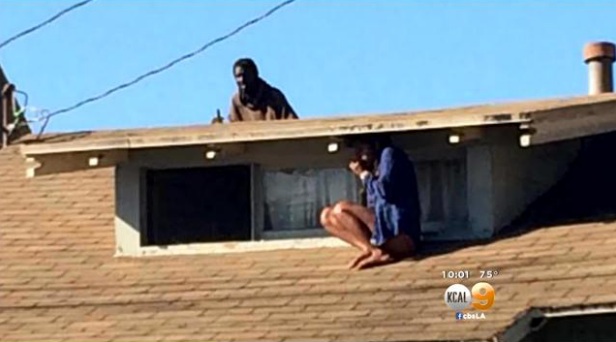 A woman in Venice, California, says she was terrified after an intruder broke into her home early Wednesday morning.

Seeking to avoid any kind of confrontation, Melora Rivera grabbed her phone crawled out of a second story window and got on top of the roof to hide from the intruder. She can be seen in photos and video hiding underneath an eave while she talked to a 911 dispatcher.

“Once I saw him in the house, I knew that we both couldn’t be there. I knew that I didn’t want to have a confrontation with him of any sort, you know, not knowing what his intention was,” Rivera told CBS Los Angeles.

In a chilling photo taken by a bystander, the man’s head is seen popping up behind the eave as he seemingly searches for Rivera.

But officers responded quickly and surrounded the home. Cops had the suspect in custody within two minutes of being dispatched, CBS Los Angeles reports.

The suspect was later identified as 29-year-old Christian Hicks, who is reportedly a well-known homeless person. He was charged with burglary and jailed on $50,000 bail.