The Occupy Movement Moves On From Rape, Vandalism, and Spreading Disease To Terrorism

In all fairness, you have to admit that the Occupy Movement is certainly moving “forward,” so the Obama administration should proud. They’re roaming beyond “Rape free zones,” spreading Scabies, and blocking bridges to actually trying to blow the bridges up[1]. Ah, it must be lies though, right? Who’d believe these lovable scamps from the “99%” would ever do something like that? 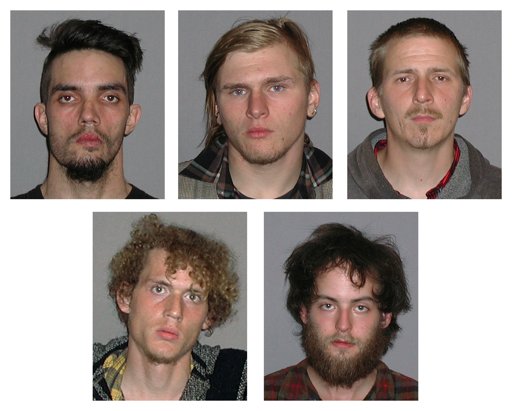 The young leftists weren’t just talking about blowing up a bridge.

The FBI alleges that the five #occupiers repeatedly attempted to blow up the Cuyahoga Valley National Park Bridge with text messages.

The FBI alleges five men charged in a bomb plot put what they thought were real explosives beneath an Ohio bridge and repeatedly tried to detonate them using text messages from cellphones.

Authorities say the suspects arrested Monday were anarchists who were angry with corporate America and unknowingly worked with an FBI informant for months. They were charged with conspiracy and trying to bomb property used in interstate commerce.

They’re being held without bond.

Authorities say the explosives were fakes and were controlled by an undercover FBI employee. The target was a highway bridge over the Cuyahoga Valley National Park, about 15 miles south of downtown Cleveland. The bridge links two wealthy suburbs.

Let’s be honest: in the eyes of the Occupiers, their mistake wasn’t engaging in terrorism, it was getting caught and looking like idiots in the process. If these clowns had gotten away with blowing up the bridge and hadn’t been pinched, everybody in the OCcupy Movement who knew about it would have treated them like heroes.

You don’t buy that? Well, I have two words for you that prove you wrong: Bill Ayers.