Thug Gets BRUTAL Lesson When He Robs Gas Station With An IRAQ VETERAN Behind The Counter!

This is like a scene from a Guy Ritchie movie[1]. If you remember which one, you get the prize… 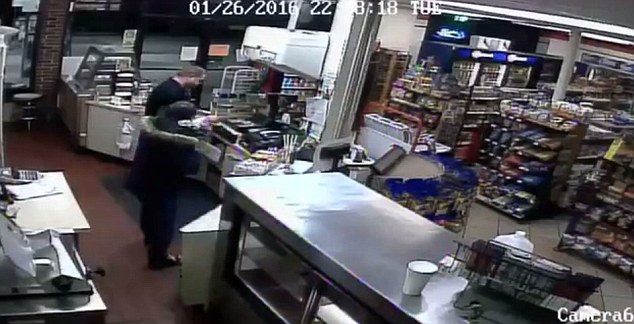 A masked man who attempted to rob a gas station store in Florida didn’t count on an Iraq veteran being on shift.

Incredible CCTV footage shows the robber getting taken down by vet David Dick after he attempted to loot a cash register and ends up running terrified out of the door.

The man entered the shop around 11pm wielding what looks to be a gun and walks straight behind the counter.

He walks out of shot of the camera, only to return seconds later with Dick who has his hands raised as he is escorted over to the cash register.

Initially, it looks like Dick is complying with the man and proceeds to take piles of bills from the till.

Then suddenly, Dick springs into action and leaps on the suspect.

A tense tussle ensues as the man struggles to free himself from Dicks grasp.

Dick continues to tackle the man as food stands go flying. But the man is not giving up easily.

Dick then swings two right hooks and as the pair crash into the counter, he swings another.

Eventually, Dick grabs the suspect’s gun and chases after him with it.

The man, believed to be between 19 and 22, managed to escape and got into a get-away car, according to the Brevard County Sheriff.

The weapon was subsequently determined to be a black and brown replica revolver style air-soft gun. The man also left a Chicago White Sox baseball hat behind.

Here’s the video of the foiled robbery…

And if you didn’t get the movie reference, here’s some help with that[3].