Toddler Cries Freezing In The Snow At 1:30AM- As Mother Does This Inside the Warmth Of The House…

Is it just us, or does it seem like there’s an epidemic of awful parenting going around? First there was the slimeball father who left his baby in the car while he was in a strip bar getting lap dances[1], and now this[2]… 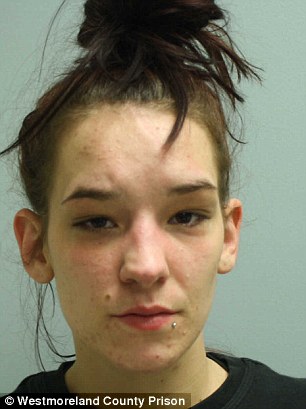 A Pennsylvania woman found a toddler crying outside in the snow at night while his mother lay curled up on the floor with various drugs in the house, police said.

Trisha Sperry, 23, the little boy’s mother, has been charged with endangering the welfare of a child and drug possession.

Elizabeth Scherff said she was visiting one of Sperry’s neighbors when she saw the 22-month-old knocking on the door of a home in Jeannette at 1:30am on Sunday.

Sperry was ‘groggy’ when authorities arrived and had several drugs in her possession, including crack cocaine, police said.

Scherff told officers she was about to leave when she heard a child crying, WTAE reported.

She said she spotted Sperry’s son two houses down, knocking on the door of a home.

The temperature was around 34 degrees at the time according to authorities, CBS Pittsburgh reported.

Another neighbor, Edward Czerbak, told WTAE it was windy and cold that night and that the toddler was shivering.

Scherff said she picked up the boy and knocked at the door, which Sperry opened.

You hear the arguments about decriminalizing drugs, and they do make some sense, and then you hear stories like this one and all you want to do is scrub them out of society as best you can. How is that kid going to have a chance at a decent life with a mother like that?