So Tragic: Husband of Woman Brain Damaged by Rock Thrown from Overpass Kills Himself [VIDEO]

Teenagers often perform pranks that they think are harmless — but unfortunately, that’s not always the case. One woman was left permanently brain-damaged after teenagers threw a rock off of an overpass, which flew through her windshield and struck her in the face. Now, the story has become even more tragic: her husband has killed himself. 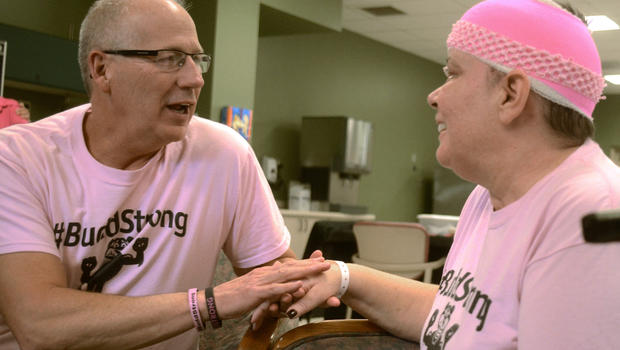 The husband of Sharon Budd, the 54-year-old Ohio woman left brain damaged after teens threw a rock through the windshield of her moving car has committed suicide – two years after the incident.

Budd and wife Sharon were the only ones in the home at the time, and his death came after he texted several family members telling them he loved them and made several phone calls to his brother, Campbell said.

In addition, he sent a message to Pennsylvania state Sen. Gene Yaw urging him to “please” get legislation passed to require fencing on highway overpasses, PennLive reported.

“The Budd family are all together and are grieving the loss of their dad, husband and brother,” the family said in a statement to The Canton Repository. “We deeply appreciate the tremendous support our family has received from the Massillon, Canton and Hartville areas over the past several years. We ask for your prayers and some privacy as we deal with our loss.”

… Sharon, who was married to Randy for 33 years, was driving with her husband and daughter Kaylee, 21, from Ohio to New York to see a Broadway play in July 2014 when a boulder came crashing through the window of their Nissan Rogue.

The former middle school language arts teacher and breast cancer survivor was hit in the forehead, suffering irreparable brain damage, a crushed skull and the loss of her right eye. She subsequently lost the ability to handle everyday tasks like showering and dressing herself, the family previously told PEOPLE.

Tyler Porter, who pleaded no contest to criminal conspiracy to commit aggravated assault, was sentenced to 22 months to 10 years in a state prison, followed by 10 years’ probation, WNEP said.

Brett Lahr, who also pleaded no contest to criminal conspiracy to commit aggravated assault, was sentenced to 18 months to 20 years in prison, his lawyer told PEOPLE in June 2015.

… After Sharon’s accident, Randy worked with an Ohio state legislator to get an Ohio Department of Transportation policy in place the requires protective fencing on new overpasses and ones undergoing significant renovations, according to the Associated Press. He was working with Sen. Yaw to do the same thing in Pennsylvania.

In addition to Sharon and daughter Kaylee, Randy is survived by sons Lucas, James and Joe.

The burden on caretakers is extraordinarily high, but it’s awful that he felt — for whatever reason — that his life was no longer worth living. It’s not clear yet why he chose to commit suicide, but hopefully, his family will be able to heal after receiving yet another devastating blow.