This may perhaps be the most perfectly bizarre[1] story you’ll read all day. 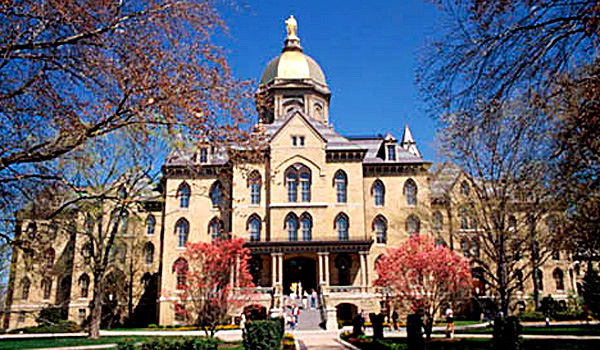 A black University of Notre Dame scholarship student was forced to have sex with a white female academic coach’s daughter, a lawsuit has claimed.

The alleged victim, who has not been named, says the faculty member coerced other African-American football and basketball players from the Indiana school into trysts.

The woman supposedly facilitated the ‘sexually and racially motivated’ relationship by providing condoms, transportation and hotel rooms in return for academic favors.

But when the plaintiff was asked by the coach about the relationship, she made racist comments and mocked his ‘sexual prowess’ and ‘genitalia’, the suit seen by The South Bend Tribune claims.

When he tried to end the relationship, she suggested he turn to Catholicism and seek mental health counselling.

The employee started helping the male student with his studies in the spring, but soon the teaching relationship soured.

She ‘initiated, directed and coordinated a sexually and racially motivated inappropriate and demeaning relationship’ between the student and her daughter.

The woman allegedly interrogated him about the ‘nature, frequency and quality of sexual activities,’ he had with her daughter.

The student’s attorneys Agostino & Keller have accused the university of fostering a ‘sexually abusive and hostile educational environment’.

They filed the lawsuit on Friday – however the names of those involved have not been mentioned.

But the daughter is said to be a university employee.

Paul Browne, vice president of public affairs and communications at Notre Dame, has slammed the claims as a bid to attract publicity. He denies any wrongdoing at the college.

He said said in a statement: ‘The allegations against the University of Notre Dame in the complaint are unfounded, as are gratuitous and unfounded references to “student athletes” — an allegation that is nothing more than a cynical attempt to attract publicity.’

The student is now demanding a jury trial and injunctive relief from the University of Notre Dame.

He also wants school officials to honor his scholarship while beginning an independent investigation into his accusations.

It is not clear whether he spoke to law enforcement about the accusations.

If this does turn out to be a true story, that woman deserves to go to jail for a long, long time.
Endnotes: