This is where drug use[1] inevitably leads women… prostitution. In Pennsylvania, Brittany Vareha, 27, and Malinda Chalmers, 41, started advertising through Escort Babylon online. They promised women with curves that don’t quit and offered a way to relieve stress for men. An undercover police officer answered the ad and set up a sting. When he showed up, Vareha directed him to Chalmers on the third floor, who asked him for $60 and told him to get comfortable. He expected that. What he didn’t expect was to find Chalmers’ 15 year-old son in a back bedroom and Vareha’s four year-old in the house as well.

Chalmers had a bag of heroin, pills and drug paraphernalia in her dresser drawer. Vareha was hiding in a bathroom with her drugs and her baby was in the living room. I’m not sure what happened to the 15 year-old. He was probably taken by child services. The four year-old was handed to his grandmother for care. Chalmers was booked on prostitution charges. She claims to only have been turning tricks for a few weeks. Right. 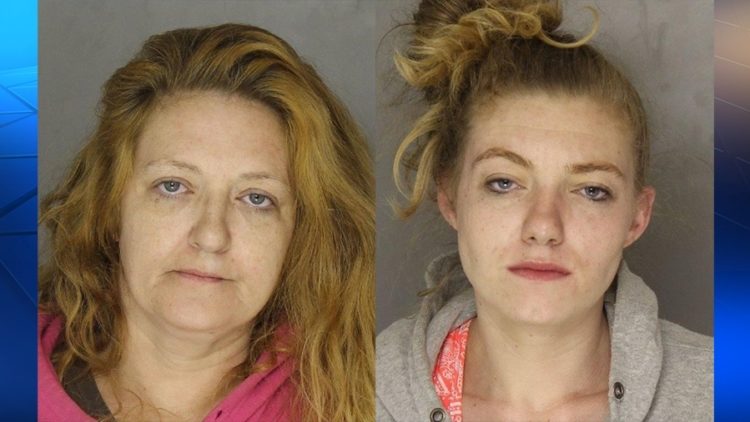 When cops in Allegheny County, Pennsylvania, busted two women suspected of being involved with prostitution, they found something truly disturbing inside the home where the illicit acts were taking place — two children.

Detectives reportedly used the internet site Escort Babylon to track down Brittany Vareha, 27, and Malinda Chalmers, 41, to a house in Shaler Township in western Pennsylvania where Chalmers solicited an undercover officer.

After moving in to make the arrest, officers found Chalmers’ 15-year-old son and Vareha’s 4-year-old son, according to KDKA[3].

The ad posted on the internet site stated, “Fine female with curves that don’t quit looking to help you relieve your stress.” It also had photos of the woman it was referring to, investigators explained.

An undercover detective called the number listed, set up a meeting and then showed up at the home.

Vareha let him in the house and pointed to the third floor where investigators said Chalmers was waiting. The 41-year-old told the detective the visit would cost $60, then told him to get comfortable.

The four year-old had been existing in filth, while the women entertained and got high. “I also noted unsanitary conditions to include several bags of garbage, some open with garbage flowing from them, in the middle of the kitchen floor on top of pet food strewn across the floor,” the criminal complaint said, according to WTAE[4]. “I also noted a soiled mattress in the back bedroom without sheeting. I discovered that (the 4 year-old boy) slept there last evening. There were additional hypodermic syringes, crack pipes, scheduled prescription medication, and heroin found on the third floor all accessible by the occupants of the residence. There were no doors preventing anybody access to the third floor,” it continued. This was a tragedy in the making.

Both women were taken to the Allegheny County Jail where they were charged with endangering the welfare of children and prohibited acts, according to the Tribune Review[5]. For the life of me, I simply cannot understand putting yourself before your children and living like this. These two women should not be allowed to have their children back and I hope a judge throws the book at them. There is no excuse for this. At least the children are safe now as their mothers hit rock bottom.