One minute a group of Marine recruiters were sitting in their office in Lynwood, Washington, and the next they were stopping a robbery of an elderly woman and nabbing one of the robbers. 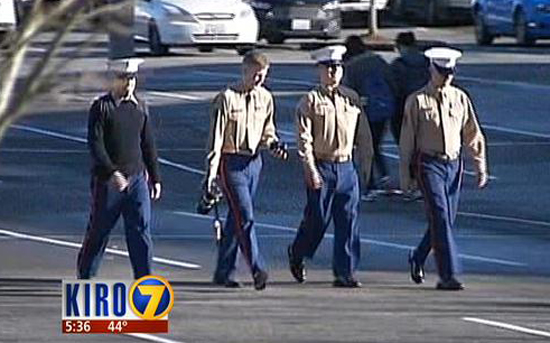 Led by Staff Sergeant Ben Shoemaker, the Marines heard a ruckus outside their office and when they went out to see what was going on they found a woman yelling for help because two teens were trying to rob her.

“She said, ‘Help me. I’m being robbed!’ I stopped paying attention to her. She’s not the problem.

That kid was never going to outrun me. Marines run towards the sound of chaos.

It’s really what I’m trained to do, be it recruiting, be it that; my job is to protect the United States Public.”

One teen was captured and he had a bat with him. A second suspect is still in the wind.

But good for these men to come to the woman’s rescue.