VIDEO: Antifa Punk Tries To Burn US Flag, But Then A Biker For Trump Shows Up [VIDEO]

During a “free speech rally,” an Antifa protester tried to burn a small American flag with her(?) friends cheering her(?) on.

For those of you wondering about the question marks, you’ll see what I mean when you watch the video. 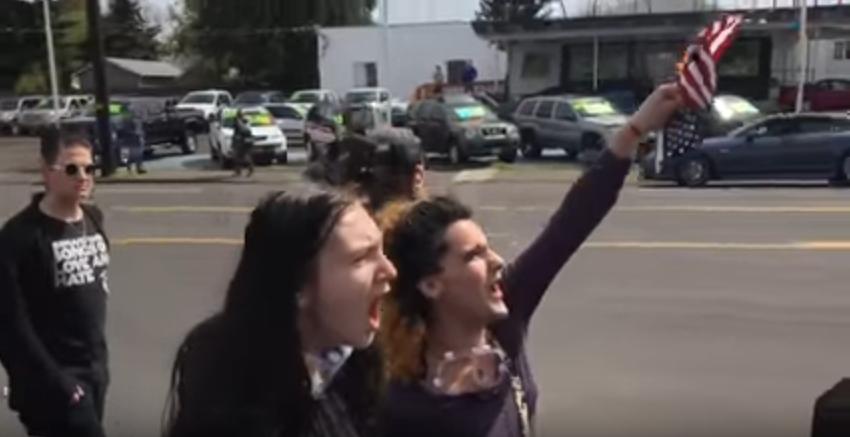 According to “Danny Doherty,” the YouTube user who published this video, the Antifa side was extremely violent during this encounter.

From the video description:

During the freedom of speech rally, a trump protester tried to set a small flag on fire, but it was taken by a free speech marcher was the fire was extinguished. They (antifa) tried to set it again but failed. Multiple fights broke out yesterday during the march and my iPhone was smashed by someone with antifas (she was arrested).

The video shows a “lady” who clearly has some sort of mustache/goatee thing going on setting the flag on fire. It was promptly grabbed by a biker for Trump, who extinguished the flames.

So, after this bearded lady gets her flag taken from her (the irony of which is completely lost on the Antifa morons) she(?) attempts to light another flag on fire, but can’t seem to do so.

And after being called “transphobic” because the man in the skirt got called out by people who understand science, the group kept walking and the person blowing the horn kept being painfully obnoxious. (No seriously, what was the point?)

So, what did we learn from this? Well, apparently putting on a skirt makes you a lady (an insult to women,) Antifa protesters share the same bottle of shampoo (and it’s clearly empty) and you can burn the flag of a country whose soldiers fought and died to preserve your free speech and do so unironically.

Did I miss anything?

In Right Wing News owner John Hawkins’ new book “101 Things All Young Adults Should Know[3],” he discusses the “controversial idea that men should be masculine and women should be feminine. Embrace yourself for who you are and don’t just put on a skirt and expect people to call you a woman. Be who you were born to be.