VIDEO: Combat Veteran on a Motorcycle Kicks His Carjacker’s A–!

In Mesa, Arizona[1], a thug tried to steal a combat veteran’s motorcycle. Motorcyclist and US veteran, Brandon Jenkins was taken by surprise when Joshua Michael Monigold walked up to him and tore him off his bike. Jenkins succeeded in keeping Monigold from stealing his motorcycle. The attack came out of nowhere. After Jenkins ripped Monigold off his bike and beat the crap out of him, the dirt bag ran back to his white pickup truck and took off. He has an arrest warrant out of Tucson for a March 19th hit-and-run accident. The police followed in hot pursuit and it did not end well for the attacker. 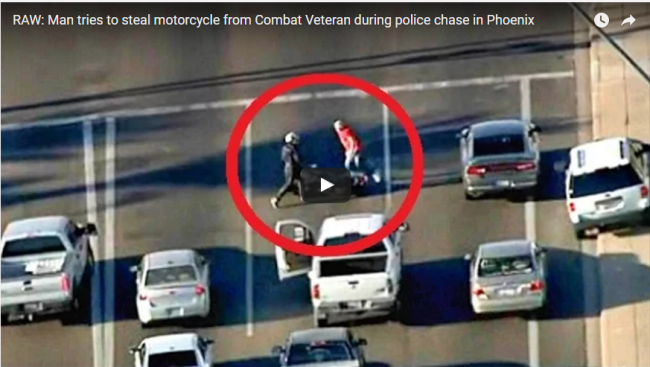 “I thought maybe I cut him off and maybe rubbed him the wrong way. Then when he ripped me off my motorcycle it became very apparent that he was trying to steal my bike.

I had headphones in and I could hear him screaming over my headphones. I told him no and I cursed at him a few times and told him to get the hell off my bike and I tried getting him off of it and obviously I got him off. I really didn’t know what was going on until the police officer showed up. I just thought I was being attacked.”

As the jerk fled the scene, he ran over Jenkins’ bike. Thankfully, Jenkins was not on the bike at the time. A lengthy police chase ensued. Monigold was eventually caught after he flipped his vehicle on the highway and was violently ejected from it. He was taken into custody and is in the hospital. If Jenkins had been armed, he would probably be in the morgue. No big loss. You don’t try and steal a combat vet’s bike and expect that you are going to come out of the encounter unscathed. What a moron.