Note to self: Do not go to jail in Canada.

The attack took place in 2013 and the man has only recently been charged for it. (Not that he had anywhere else to be. He wasn’t exactly a flight risk while he was still in prison.) 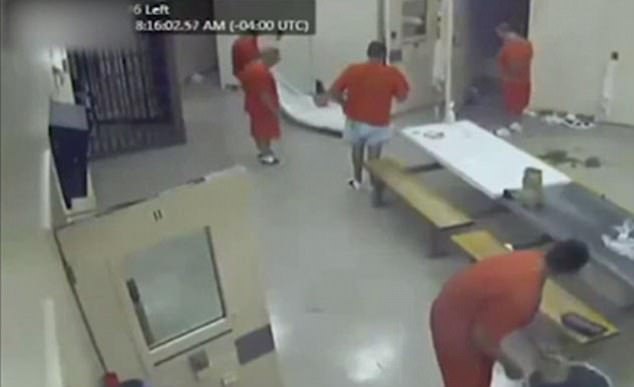 You can see 29 year-old Kargus being repeatedly harassed by 32 year-old George and guards only coming in to break up an altercation one time. George placed Kargus in choke-holds and beat on him multiple times all within view of his fellow inmates.

Footage of the attack itself lasts an hour or so and then it cuts to the next day.

You can see the other inmates coming out of their cells and George enlisting their help to dispose of the body and clean up the remaining blood in the cell.

Kargus’ body was wrapped up in a sheet and drug into the shower where he was placed into a stall.

According to paramedics at the scene, the victim died from blunt force trauma to his face, which was so bad that he was only able to be identified by his tattoos.

How on Earth did this pass by the guards un-noticed? I’m not saying security in Canadian jails sucks, I’m just saying that this is a pretty huge error that needs to be addressed. While the prisoner is 100% at fault for the murder, the guards are 100% at fault for not stopping it. They were given multiple opportunities to do so, including the one time that they stepped in to break up the altercation and did not take further measures to ensure the safety of both inmates.

At the time he was asked why he killed his cellmate, George replied that he had gotten drunk off of a “toilet bowl of jailhouse brew” and had smoked a cigarette laced with PCP before the murder. What makes it worse is that a nurse who knew of George’s intoxication had told guards, who still did nothing.

This was a huge failure on the part of the prison, which didn’t do anything to protect its inmate. I don’t care what the crime was, it is not the responsibility of the inmates to pass judgement on others.

George received a life sentence without the possibility of parole.