VIDEO: Mothers’ revenge: ‘Child rapist’ is tied up and beaten by women in India

A supposed rapist was tied up and beaten with sticks by a several women after he was suspected of raping[1] a young child.

The video of the beating, which is said to have been filmed in India, shows three women surrounding a man, tying his hands behind his back and dragging him across the ground using a rope, while two of the women beat him with long, thin sticks. 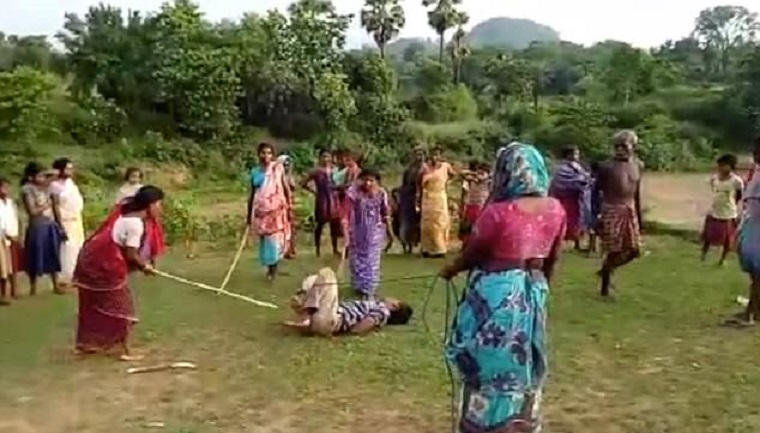 Dozens of women and children look on as the women take turns beating the living hell out of the man with large sticks.

The man doesn’t appear to have anything left in him to fight the beating and instead lies on the ground as the women just wallop him over and over again with the sticks.

Footage ends with a clip of a police officer addressing the crowd as the declared rapist lies on the ground nearby, still tied up.

The details of the rape are still unknown.

Video of the women getting their revenge on the man was uploaded to LiveLeak, where it has been watched more than 23,000 times. Sexual assault continues to be a national issue in India, where the number of reported rapes in the country is in the tens of thousands each year.

In 2015 alone, there were 34,000 reported cases of rape in the country, though that number is likely to be far higher since many do not go to the police for fear they will not be believed, or will be shunned by their community.

Marital rape is also one that is not deemed a crime, which furthers the string of unreported cases. In 2014, there were around 14,000 reported cases of child rape alone.

The most notorious rape case in modern Indian history took place in New Delhi in 2012, when an intern, Jyoti Singh, was savagely raped and tortured on a bus by six men who – among other things – desecrated her with a steel pole. She was taken to the hospital, but succumbed to her injuries which were internal, setting off nationwide protests.