VIDEO: Passenger who ‘sexually assaulted’ sleeping woman on metro is beaten by witnesses

A Mexican man accused of sexually assaulting a woman on public transport has been filmed being attacked in the street by passengers. Let me tell you, this guy got his just desserts after what he did.[1] 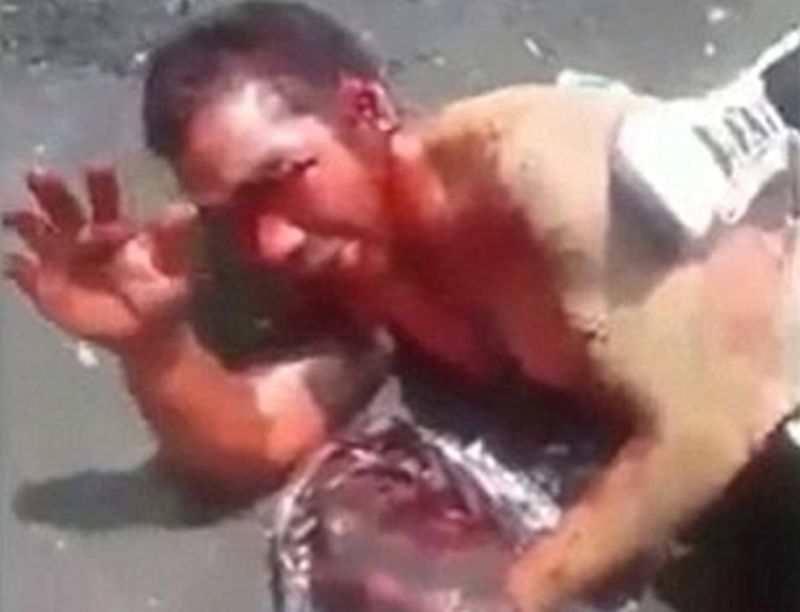 Carlos Sanchez, 29, was allegedly spotted on the underground in Mexico City touching a woman in the crotch as she slept.

The assault woke her up and alerted the other passengers to what she had just experienced.

The man tried to escape at the ‘Plaza Aragon’ station, but various people on the train stopped him on the platform, and dragged him outside the station.

Images filmed by one of the witnesses show the man with his top off lying bloody on the floor.

He covers his face with his shirt as people around him and beat him until his face is covered in blood.

The group take turns kicking the man, but because of the angle the video is shot at, it is not clear whether his attackers are male or female.

At one point, it appears that a man grabs his underpants and pulls them up high enough that they rip.

A woman in the background can be heard shouting: ‘Show your face you son of a b***h.

‘He was touching me, I was sleeping on the metro and he was sitting next to me putting his hand where it shouldn’t be.’

After a while Gonzalez is left recovering on the pavement as the crowd wait for police to arrive.

The suspect was taken into custody, closely followed by the assaulted woman, who pressed charges against him for sexual assault.

Public beatings in South and Central America are an increasingly common activity.

Members of the public, fed up with the lack of police action, decide to take the law into their own hands to punish sexual deviants and thieves. As far as I am concerned, this piece of trash got all he deserved for his disgusting behavior. Watch for yourself: