VIDEO: Thug beats pregnant girlfriend on crutches so violently her SKULL is exposed

This is just brutally horrifying.[1] This happened in June of last year in Roanoke, Virginia. Jamar Bernard Woody got into a fight with his pregnant girlfriend on crutches in a convenience story. He beat her so viciously that her skull was exposed. Shatory Irving had a broken ankle and was three-months pregnant at the time. This is the video that was shown at the trial. It’s shocking.

Doctors who testified at the trial stated that Irving’s skull was exposed during the beating which caused an inch-long split in her forehead. Her child thankfully was born healthy, although prematurely last year. Local attorney David Billingsley told the Roanoke Times: “She really is fortunate that she wasn’t hurt more than she actually was.” She’s lucky he didn’t kill her and the baby right there on the spot. Woody was just convicted of malicious wounding. Never heard that one before and it doesn’t go anywhere near far enough here. The jury recommended a sentence of eight years in prison – two more than the maximum guidelines. Wish granted… that’s exactly what this thug got. 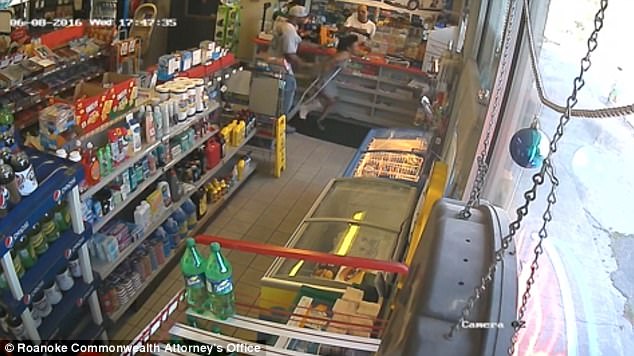 Horrific CCTV footage shown to a court reveals the moment a thug exposed his pregnant girlfriend’s skull when he viciously beat her up at a convenience store.

The 26-year-old victim was three months pregnant at the time and dependent on crutches because of a broken ankle.

In the awful clip, which was shown to jurors during the trial, Woody can be seen punching Ms Irving and continuing when she falls to the floor.

Here’s the kicker. This woman who was almost beat to death by the father of her child, gave testimony during Woody’s trial hoping to keep him out of jail. She’s sick and I’m not sure she’s fit to be a mother if that is true. She described how she violated a protective order he had taken out against her in 2014 and broke windows during a disagreement. “You have to understand, it is a volatile, toxic relationship,” defense attorney Melvin Hill told the Roanoke Times. I don’t give a rip… it does not excuse attempted murder.

The Judge, Chris Clemens, is including an order for psychiatric treatment in Woody’s sentence. Good for him. It turns out that Woody has a history of mental health problems. You might want to do the same for his girlfriend while you are at it. She’s nuts too.