VIDEO: Two Girls Are Beaten & Robbed Inside Hotel While Twerking On Facebook Live

A video has been published that purports to show two women who were in the middle of a Facebook live video having their hotel room broken into. They were allegedly “beaten” and “robbed,” but there is some suspicion surrounding the legitimacy of that claim.

Either way, it is safe to say that this video is NSFW. 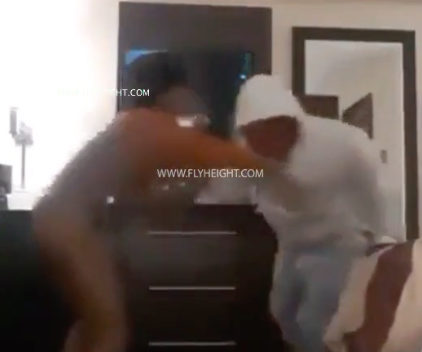 The girls, clad in traditional twerking garb (not much,) began “performing” in front of the camera. Not that I’m a professional in the arena of twerking, but I have to say that this wasn’t the best display I’ve ever seen. And if you had told me 30 minutes ago that I would be writing an article on twerking and critiquing it, I would have called you a liar. But here we are.

So, about 43 seconds into the video, you can see a man in a white hoodie tackle the girl in the orange halfshirt. And then strangely drag him by the hand (which he appears to allow her to do) off to the left of the screen. You can hear the girl’s screaming off camera and it takes about a minute and a half for one of the ladies to appear again, seemingly carrying a towel.

The phone falls from its perch and the screen goes black for several seconds before it is picked up again. The girl in the orange halfshirt has returned with what appears to be a laceration on her nose.

This is either a common occurrence for them, or something is fishy because she seems way too calm and collected for what is alleged to have happened. Of course again, I’m not an authority on that, but this video does raise some eyebrows.

All of this happens in the span of 3 minutes.

The part that I have a particular problem with was the segment right after the guy “broke into” the room and tackled the girl onto the bed. They are attached at the wrists (it’s hard to tell who has control of who), but no fighting happens. In fact, the guy doesn’t seem even slightly hostile or aggressive. She seems to be doing all of the pulling.

Now, it’s entirely possible he had a hold of her and she was trying to run away and perhaps he was still off balance from the tackle. Perhaps the girls were traumatized from the incident and weren’t hysterical. Who knows?