VIDEO: Two Thugs Attempt to Rob a 74 Year-Old Woman in a Gun Store – WATCH What Happens next!

Thank goodness for criminal morons and female store owners who have a set and a gun to shoot said morons. These mental giants picked a gun and pawn store to rob. This has happened at this store before and the owners shot at the thieves then too. The hoodied thugs thought it would be easy pickin’s I guess – only the 74 year-old woman who was one of the owners didn’t hesitate to shoot one of the idiots. When his partner, another member of MENSA, went to check on him in the hospital, both wound up in custody.[1] 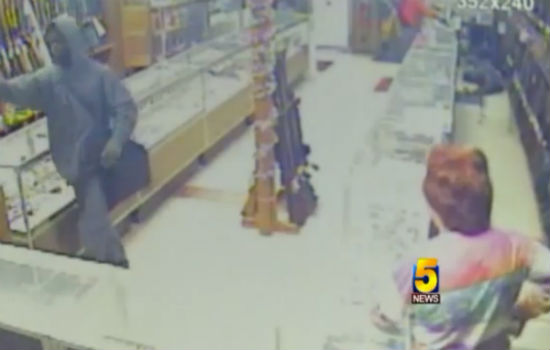 Those who understand the value of the Second Amendment understand that a “good guy with a gun” is the key to curbing gun violence. Crazed murderers target so-called “gun-free zones” as the inhabitants of such areas are often easy targets.

However, a recent duo of robbers decided to do the opposite and rob a place with tons of guns- their local gun store. Predictably, it didn’t end up well for the robbers who were bested by a 74 year-old woman who pulled her piece in response to the threat.

On December 6th, two men walked into a gun store in Springdale, Arkansas, and tried to rob it. According to KSFM News,[3]

‘They split up, they both pulled out hand guns that looked like black semi-automatic pistols and began to rob the store,’ according to Lt. Derek Hudson with the Springdale Police Department.

74-year-old Shirley Cornett, however, pulled her concealed .38 revolver and shot one of the robbers. Police found Marcus Gould, 25, at a local hospital getting treated for his gunshot wound. The second robber, 20-year-old Leon Robinson, returned to the hospital to check on his accomplice and after a short chase, was captured by police.

Police obtained a warrant to search their vehicle and found the two weapons used in the attempted robbery as well as several other items that demonstrated their guilt. The two were promptly arrested.

Normally, in situations where the “good guy (or gal) with a gun” emerges victorious, it serves as a shining example of how concealed carry laws save lives.

However, in this case, these robbers went to the one place where firearms were sure to be to commit their nefarious crime. Had these two morons ever ventured into a gun store before, they would likely have known that gun store owners and the inhabitants of such stores are some of the most-likely to be packing heat.

What bothers me is the response of the owner, Cal Ghandi, of the Scottish Inn and Suites across the way. He said of the business owners that it was okay to own a gun, but they shouldn’t have fired it because someone could have gotten hurt. Uh… that’s the point, you cretin. The thugs commit a crime, they get ventilated. This guy gives me a headache. I say good for the owners and the criminals got what they had coming to them. They are going away for a long while hopefully and others will think twice before robbing a store where the owners shoot those who mean to rob them. The 2nd Amendment is ensured security.