I’m always dubious of these stories from waitresses featuring mean comments they got instead of tips. How do you know they’re not lying? 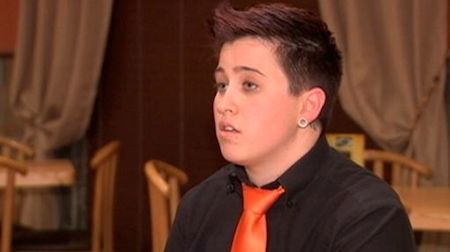 I’ve never liked these, “I’m a waitress and here’s someone who left me a nasty note instead of a tip” stories. First of all, even if that happens, the name of the customer that does it shouldn’t be on the Internet. That’s a violation of that person’s privacy and a waitress who does it deserves to be fired. Furthermore, you don’t know the whole story. Maybe the server was incredibly rude or behaved badly in some other way that caused the person to write the comment. Last but not least, how do you know someone didn’t just make it up? These people get bathed in sympathy and money and it’s very difficult to check behind them.

Are they lying? Well, at least one of these waitresses was[3].

After a gay server at a New Jersey restaurant said a customer denied her a tip and wrote her a hateful note on the receipt, a local family contacted NBC 4 New York and said their receipt shows they paid a tip and didn’t write any such note.

Dayna Morales, a former Marine and a server at Gallop Asian Bistro in Bridgewater, posted a photo on Facebook earlier this month, showing the bill with a line through the space for a tip. The photo of the receipt showed someone had written, “I’m sorry but I cannot tip because I do not agree with your lifestyle.”

Morales indicated in her Facebook post, and in subsequent media interviews — including with NBC 4 New York — that the customer wrote that line.

But a family contacted NBC 4 New York claiming their receipt from the restaurant shows they did leave a tip, and provided what they said was a credit card statement as proof.

The husband and wife, who asked to remain anonymous, showed NBC 4 New York a receipt that appeared to be printed at the same minute, on the same date, for the same $93.55 total, except with an $18 tip.

They also provided a document they said was a Visa bill, which appears to indicate their card was charged for the meal plus the tip, for a total of $111.55.

The couple told NBC 4 New York that they believed their receipt was used for a hoax. The wife says she is left-handed and could not have made the slash in the tip line, which she said looks to be drawn from the right.

…They said they came forward because the story of the receipt note didn’t appear to be going away; Morales had recently announced that people were sending her tips from all over the world, and was donating some of the money to the Wounded Warrior Project.

“I just felt like people have a right to know that — it’s fine of people want to donate to her or to the Wounded Warriors, but they’re doing it under a false pretense,” the wife said.

The ticket is from the same restaurant, at the same time, with the same server and the family showed the reporter their credit card statement to prove they left a tip. So, congratulations if you sent this lying waitress a tip because you essentially fell for her version of a Nigerian email scam.

PS: Since the waitress was taking money, the police should be investigating her for fraud and if, as it appears, she’s guilty, she deserves jail time.