“At least a 200 pound man has a puncher’s chance against a criminal who wants to hurt him, but a 120 pound woman is nothing but a victim in the same situation. For a woman, having a gun may be the difference between staying in control or being at a thug’s mercy, between getting a good scare and getting raped, between seeing her child again and being left dead in a ditch. Yet, liberals believe that a woman trapped in a dark alley by some Ted Bundy wannabe carrying a scalpel, handcuffs, and a noose should be stripped of her ability to defend herself….The best friends the stalker, violent ex-boyfriend, and rapist have are pro-gun-control liberals who are hell-bent on making sure women can’t defend themselves.” — John Hawkins[1] 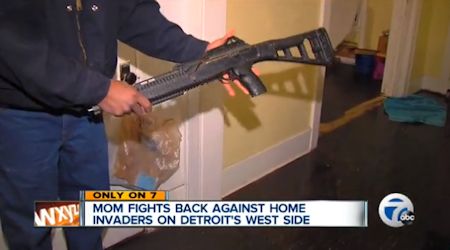 If you want to know what I was talking about in that quote, if you want to SEE IT IN ACTION, pay attention to this story[3].

You don’t want to mess with this mom!

A Detroit woman surprised a trio of armed teen thugs when they came to try and rob her house.

Instead of sitting back and watching them steal her stuff, she locked and loaded a rifle – and then fired it as she chased them back outside.

The dramatic incident was caught on surveillance camera.

Footage shows the three teens trying to kick down her front door.

But, as they start to make their way inside, the woman pops up with a gun. She starts firing to try and scare them off, and they all run away.

One of the boys, armed with a handgun, tries his luck again and rushes the door.

But he soon scuttles off again after hearing bullets being fired in his direction.

…No one was hurt in the incident, and cops arrested the three suspects soon after.

For that woman, that gun may have been the difference between being gang raped before her children were murdered in front of her and being okay. You want to wage “war on women?” Enable rapists, stalkers and thugs by passing gun control laws that put women like this mom at their mercy instead of allowing her to defend herself and her children.

12 Unspoken Rules For Being A Liberal[5]